There is No Escape from Gilligan’s Island 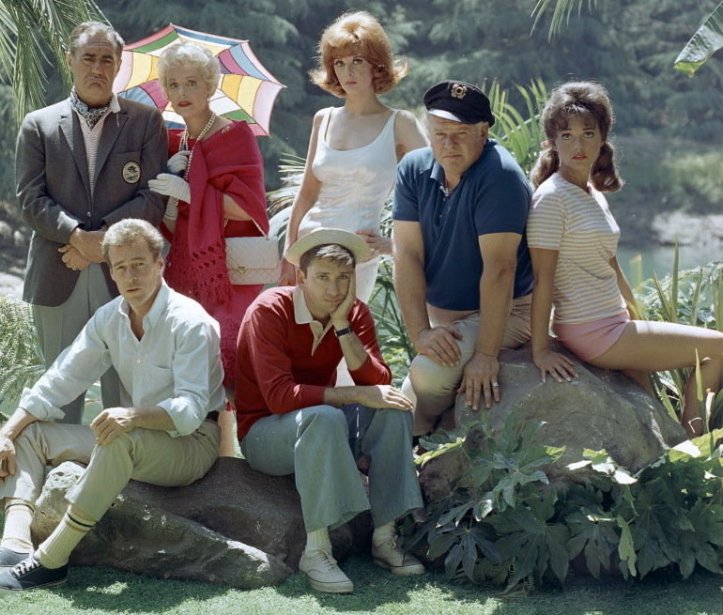 Well, it’s Sherwood Schwartz’s birthday again, and having already written a post on the man himself, as well as The Brady Bunch and several of his other shows, it is high time we touch on the cultural bellwether he unleashed on the world in 1964, Gilligan’s Island.

In its time, G.I. (h’m, same initials as those for “gastro-intestinal”) was reviled by critics as a new benchmark for television’s lowest cultural moment to date, much the same as Charlie’s Angels would be a decade later. Dr. Schwartz defended the show by claiming he intended his setting to be an allegorical microcosm, not unlike, say, the ones in No Exit or Waiting for Godot. While the simple symbolism-fraught framework of the situation (trapped on an island FOREVER) does possess superficial similarities with existentialism or absurdism, Dr. Schwartz is overlooking one minor point: ALL OF THE DIALOGUE IS REALLY STUPID. I love the show, I grew up watching it, and have seen every episode a half dozen times, but don’t try to tell me the dialogue is clever or sophisticated or witty. It is aimed primarily at eight years olds. No, not 12 year olds — I was reading actual books by the time I was 12. 12 year olds are pretty smart. Eight.

It does lead me to wonder, though: had Schwartz seen Laurel and Hardy’s last movie Utopia a.k.a Atoll K, in which the two comedians were stranded on an island with a few friends? As is often observed, the fat/skinny relationship does seem to draw from the famous comedy team, especially Alan Hale Jr.’s direct looks to the camera, exasperated sighs, and the habit of striking Gilligan (Bob Denver) over the head with his hat, all of which channel Oliver Hardy. Denver was no Laurel, but he was willing to take a pratfall, and his presence on the show had its resonances (see our earlier tribute here).

Resonant in an altogether different way was the stunt casting of screen hotsy totsy and pin-up model Tina Louise as the movie star Ginger Grant, actively channeling Marilyn Monroe all the while. Marilyn had died in ugly circumstances only recently at that point. Wasn’t this stuff “too soon”? But these were different times. Louise is the only one of the seven I ever saw in person — she was one of the celebrities at a Michael Dukakis campaign rally I attended in 1988! I bet she has more regrets than he does about the association.

As the millionaire Thurston Howell III, Jim Backus broke out a routine he had been doing on radio and in movies for decades (most memorably in It’s a Mad Mad Mad Mad World just a year before Gilligan’s Island launched). And movie veteran Natalie Schafer as “Lovey” was simply playing herself, the sort of Margaret Dumont of the ensemble, though without the girthsome bearing. 63 when the show launched, Schafer was actually 13 years older than Backus, although that was a well-kept secret at the time. At the turn of the century (the most recent one) when the Billionaires for Bush were a thing, we had an entire generation of activists doing Thurston and Lovey schtick and it was adorable, if politically ineffective.

As for Russell Johnson, I’m one of the few people on earth who has actually read his autobiography Here on Gilligan’s Isle (1993). I had an hour to kill; I was near a library; it was on the shelf; I make no apologies. Johnson was also slightly typecast in his role as the Professor. His pre-Gilligan credits were relatively heavy in the sci-fi department, including TV shows like The Twilight Zone and Outer Limits, and films like It Came from Outer Space (1953), This Island Earth (1955), Attack of the Crab Monsters (1956), and The Space Children (1958). Please don’t read any double entendre into it when I say: Johnson fit the khakis.

The only one of the seven who kind of had nothing going on in terms of past associations was Dawn Wells as Mary Ann. And, in what way was she a farm girl, really? She wasn’t earthy or backward, nor did she bring any notable agriculture skills or knowledge to the table that I can recall. She’s nearly as beautiful and glamorous as Tina Louise, but she’s not a randy farm girl who wants to get it on in the haystacks like Daisey Mae or Ellie Mae or whatever. She’s just sort of vaguely wholesome? Bakes pies? Did she win a beauty pageant or something? What’s the deal? (Haha, I just looked her up and — YES, she DID win a beauty contest! She was Miss Nevada 1959! And she beat out Raquel Welch! va va voom! Hey now, what are they growing on that farm? Radioactive sugar beets?)

It’s long been an ice-breaking personality test to ask guys if they prefer Ginger or Mary Ann, much as one asks “do you like Betty or Veronica?” What’s being asked is “Do you like the nice girl or the naughty girl?” But Ginger and Mary Ann are sort of the same, they’re not really differentiated in the way that’s implied. Like, the same person did their makeup and hair, you know? It’s just that Mary Ann is wearing the “naughty Dorothy” costume that Ginger probably would have worn in her farm girl movie (literally, actually — witness God’s Little Acre). My answer to that eternal question is invariably “both”. They had a lot of time to kill on that island. Why, after awhile those girls would probably have gotten around to Skipper.

It’s tiresome at this stage to dwell on the show’s many implausibilities. It is shot mostly on a closed indoor sound stage. It LOOKS like theatre. License is permitted in all sorts of ways, and as we have said, it is for eight year olds, even if Schwartz thought he was Sartre. I for one, have always found the show soothing and beautiful to look at, those rich 1960s TV colors — blue sea, blue sky, green palm fronds, red jersey! It’s kind of like Tele-Tubbies in that way.

Gilligan’s Island lasted until 1967 in its original form, then went into perpetual syndication which is where I watched it and watched it and watched it. Some favorite episodes off the top of my head: the one with the Mosquitoes (a parody of The Beatles), one where Phil Silvers is a Hollywood Producer, ones where Vito Scotti is a mad scientist, one that’s a spoof of The Most Dangerous Game (my first introduction to that classic horror story), Hans Conried as pilot “Wrongway Feldman”, Nehemiah Persoff as a South American dictator, and anything involving a guy in a gorilla suit.