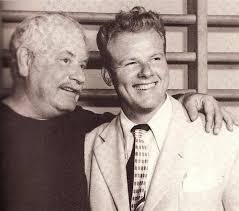 Like most living humans, my pathway to the father-and-son Alan Hales went backward from the most trivial starting place, Gilligan’s Island. We became familiar with Alan Hale, Jr. (The Skipper) first, and then later were delighted to encounter his dad, who is eerily similar to him in both voice and appearance, in old Warner Brothers movies. Both men had the same, unmistakable hearty laugh.

The dad was born Rufus Edward Mackahan (1892-1950) and was born and raised in Washington DC.  Note the significance of the surname. His given name is Irish; his screen name is mightily WASP. Hale trained to be an opera singer but was already being cast in films at Philadelphia-based Lubin studios in 1912 when he wasn’t yet 20. . Over his long career Alan Hale the Elder was to appear in nearly 250 films, around half of them silent.

He also appeared in half a dozen Broadway shows: The Poor Little Rich Girl (1913) with Viola Dana, Rock-a-Bye Baby (1918) with Frank Morgan and Louise Dresser, A Lonely Romeo (1919) with Lew Fields and his son Herbert, Here’s How (1928) with Ben Bernie, Eric Blore, William Frawley and Fuzzy Knight, David Belasco’s Mima (1928) with Sidney Blackmer and Gordon Craig, and Elmer Rice’s We the People (1933).

Hale starred in so many classics (and they’re not all listed here) that it’s almost like was a sort of lucky charm. He co-starred with Errol Flynn no less than 13 times, and was also seen in the frequent company of the rest of the “Warner Brothers stock company”. He also directed eight films in the silent days, in some of which he also appeared as an actor: The Passing Storm (1915), The Scarlet Honeymoon (1925), The Wedding Song (1925), Braveheart (1925), Forbidden Waters (1926), The Sporting Lover (1926), Risky Business (1926), and Rubber Tires (1927). According to IMDB he also co-directed the Charley Chase short Neighborhood House (1936). That’s one I’d like to know more about! It’s made around the same time he was in Our Relations with Laurel and Hardy; it may have come about just because he happened to be on the Hal Roach lot.

In 1914, Hale married actress Gretchen Hartman. She it was who gave birth to an Alan Hale Jr.

Starting in the early ’40s, Alan Hale, Jr. started playing bit parts in films. His acting career wasn’t nearly as significant as his dad’s but he did work constantly in films and television prior to Gilligan’s Island. Some notable pictures included It Happened on Fifth Avenue (1947), Kill the Umpire (1950), The True Story of Jesse James (1957) and The Crawling Hand (1963). In addition to many television guest appearances he’d also been a regular on three shows: The Gene Autry Show (1950-52), Biff Baker (1952-54), and Casey Jones (1957-58). Westerns were a particular specialty for him, both before and after the Gilligan years.

Gilligan’s Island, which we wrote about here, ran from 1964 through 1967, and then of course there were the endless reunions, sequels, and Skipper cameos that infiltrated his last couple of decades. (The character’s real name, btw was Jonas Grumby.) But unlike just about everybody in the cast, Hale fared pretty well in securing other roles for himself. He appeared in movies like Hang’Em High (1968), Tiger by the Tail (1970), There was a Crooked Man (1970), The North Avenue Irregulars (1979), and The Fifth Musketeers (1979), as well as shlockier stuff like The Giant Spider Invasion (1975), Angels Brigade (1979) and Terror Night (1987). And he did guest shots on TV shows like Ironside, The Doris Day Show, Gunsmoke, McMillan and Wife, The Love Boat, Fantasy Island and Murder She Wrote. He died of cancer in 1990 at age 68.