Of Robert Reed and The Secrets of “The Brady Bunch”

A trained Shakespearean actor who’d studied at RADA and was a member of the Actor’s Studio, with many diverse credits under his belt, Reed would have hated being only known for his role on the evergreen sitcom The Brady Bunch (1969-1974), and so we’ll talk about some of his other work before and after it as well. A telling point: believe it or not, he ultimately beat out Gene Hackman, the producers’ first choice (!), for the role of Mike Brady, because at the time Reed actually had a certain amount of name recognition. He’d co-starred on the legal drama The Defenders (1961-1965) with E.G. Marshall and had been in the films Hurry Sundown (1967), Star! (1968, a film we wrote about in this post), and the Rowan and Martin vehicle The Maltese Bippy (1969).

Good looking, All-American Reed had been raised in Illinois, Texas and Oklahoma and had spent part of his childhood on ranches. He seemed both strong and sensitive, and had a sense of humor. These are perfect qualities for a TV dad, and so he landed The Brady Bunch, conceived by Sherwood Schwartz, the sitcom impresario whose biggest success at that time had been Gilligan’s Island. Schwartz seemed oddly preoccupied with battles between the sexes. It was a running theme on Gilligan’s Island, and it was at the heart of The Brady Bunch, as well: the boys vs. the girls. The Brady Bunch was a riff on what was a popular comedy subgenre at the time, which I call “The Biggest Family Ever”. It included such movies as Cheaper by the Dozen (1950), Yours, Mine and Ours (1968) with Lucille Ball and Henry Fonda; and With Six You Get Eggroll (1968), with Brian Keith and Doris Day. Schwartz asserted that he’d gotten the idea for his own show from a news article about modern families; he’d begun working on it prior to these movies, back in 1966. The premise of The Brady Bunch is that a widower (Reed) with three sons marries a single mom (musical comedy star Florence Henderson) with three daughters. Carol Brady’s past is left vague; we never know if she was widowed or divorced. Dark woman of mystery! 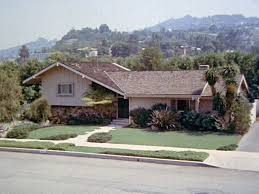 While this show ran until I was nine years old, I never watched it in prime-time. This kind of saccharine family entertainment was not my parents’ cup of tea. As a family we tended to watch variety shows, news programs, and gritty cop shows and mysteries. So, like many, I watched it in syndicated reruns…and watched it, and watched it, and watched it. I saw every episode many, many times. When I was very young, I even dreamed about it, and dreamed that my own life was a TV show, like The Truman Show or something. People of my generation kind of obsessed about The Brady Bunch for whatever reason. I think it was the strong identification with kids roughly our own age, even if our lives were very different from their’s. A one income family? The father an architect? They have a live-in maid (Ann B. Davis) who wears a maid’s uniform? They seem to live in the hills above Los Angeles, perhaps not too far from the Manson Family?

When I first watched the show, I identified most strongly with Bobby (Mike Lookinland) the youngest boy. When I got older, I didn’t identify with any of them…because I was older! And I had noticed by then that I was nothing like these bland suburban kids. By that time, I was far more interested in the GIRLS on the show. Well, not the cutesy, lisping Cindy (Susan Olsen) of course. She was the show’s Baby Jane Hudson. I mean the GIRLS, the GIRLS QUA GIRLS. Marsha (Maureen McCormick), as everyone knows, was the hot one. Which is why Jan (Eve Plumb), the serious, shy one, became the heart throb. Marsha would be the popular, stuck-up girl you could never hope to date, or would regret dating if you managed to land her. The sensitive, bespectacled, insecure Jan seemed like more of a human being, and thus at once more interesting and more approachable. I actually got to meet Eve Plumb a couple of years ago (on the set of this movie) and as almost always happens to me on such occasions I squandered the opportunity. Suddenly she was there, and I found myself unprepared to say what I’d like to have said, and anyway it wasn’t opportune in the moment. What do you say? “Hi, so nice to meet you! And by the way, I, like millions of other tween boys in the 1970s, had a crush on you?” Believe me, she knows, she knows. I should have said it anyway! I’m sure “You haven’t changed a bit since you were 12 years old!” is just what the sextigenarian wants to hear! 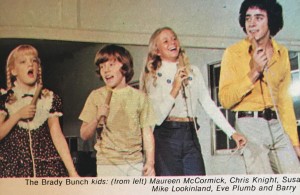 Of the six kids, Plumb was also the one with best career beyond the show. Child actors are a roll of the dice. They can get by on personality alone, which is why so many of them wash out in the business as adults — they were never actors to begin with. Think of how lucky the producers were on Roseanne — both Sarah Gilbert and Lecy Goranson turned out to be terrific actresses, both for comedy and drama. Michael Fishman, who played D.J., not so much. Most of the kids on The Brady Bunch were at about the Fishman level. But not Plumb. For a while in the mid to late mid 1970s she starred or appeared in numerous high profile, dramatic TV movies, like this one. (Unlike some of the others, Plumb had had a bit of a career prior to The Brady Bunch, as well. She’d appeared on Family Affair, and other programs). Plumb had a standoffish integrity that earned respect, staying away, for a time, from such dubious projects as The Brady Bunch Variety Hour (1976-77), a Sid and Marty Krofft produced entertainment program, on which the fictitious family sang, danced and performed in comedy skits. Plumb’s absence forced the producers to hire Geri Reischl, who was to be there ever after vilified as “Fake Jan”. O, how we hated Fake Jan, illegitimate pretender to a seat at the Brady table! There is an amusing irony to that, given that the lesson of The Brady Bunch was theoretically about embracing new people into the bosom of your family. (As we had earlier done with young “Oliver”, played by Robbie Rist). By the ’80s though, Plumb drank the Kool-Aid, and she was there for The Brady Girls Get Married (1981), The Brady Brides (1981), A Very Brady Christmas (1988), and The Bradys (1990).

As for Reed, there was backstage drama, some amusing, some not so funny. I found an article in an April 1970 issued of TV Guide that is kind of jaw-dropping in light of what we now know. First, on the light-hearted side, we have the serious-minded Reed’s Quixotic kerfuffles with Schwartz on the content of the show, mostly along the lines of “My character wouldn’t say this.” “I thought the show was going to be something else, “says Reed in the article, “that it was going to be more realistic, that we would be real humans. The pilot turned out to be Gilligan’s Island with kids — full of gags and gimmicks. At first I went along and decided to do the best I could. But now I argue.” You thought you would get realism from the creator of Gilligan’s Island??? And according to the lore, Reed argued about every script with Schwartz for the entire five years of the series. His memos have become legendary. His most famous one was his last — it got him fired from the show, which was cancelled anyway, although he was wisely asked back for the many reunions. The text of that last memo is here. It’s pretty pompous!

On the serious side, as the public learned when he died in 1992, Reed was a closeted gay man. He had HIV at the time of his death, though colon cancer is what took him. And thus quotes likes these from that TV Guide article, at the time probably pretty innocuous, now seem loaded and coded with meaning:

“He’s not prone to talk about himself — not as outgoing as a lot of people. The only time I’ve seen him talkative is when he wants a better script” (Florence Henderson)

“Bob can chitchat, but things that concern him personally are not for casual conversation.” (E.G. Marshall)

“He is the hardest nut I’ve ever had to crack. Somehow I can’t get around him. He is very guarded.” (Sherwood Schwartz)

“He is reluctant to talk about himself.” (unnamed co-worker)

“I have never seen such a secret person.” (another unnamed co-worker)

As we have said, despite strong public association with his Brady character, Reed managed to amass scores of film and television credits outside the series. Some notable ones (as far as I’m concerned) include the TV movies Haunts of the Very Rich (1972), which we blogged about here; The Boy in the Plastic Bubble (1976); Roots (1977); and SST: Death Flight (1977).  He played a transsexual in a two-part episode of Medical Center (1975), which was nominated for an Emmy. He was also nominated for Emmys for his roles in Rich Man, Poor Man (1976) and Roots.