The Surprising Origins of George Stevens 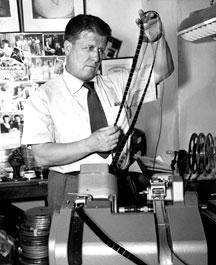 Today is the birthday of film director George Stevens (1904-1975). revered to day as the creator of such classics as Alice Adams, Gunga Din, A Place in the Sun, Shane, Giant, and The Diary of  Diary of Anne Frank, Stevens got his start in the comedy trenches in the silent days, and worked with some of our finest slapstick comedians.

Stevens was the son of two actors, and the nephew of the distinguished theatre critic Ashton Stevens. His entree into films came as cameraman/ cinematographer for Hal Roach in 1923, notably (after 1927) on the films of Laurel and Hardy. It is Stevens who solved the problem of how to photograph Laurel’s pale blue eyes so that he wouldn’t look like a terrifying zombie (he shot through a filtered lens that did away with the Daddy Warbucks effect). His first directorial effort was the comedy short Ladies Last (1930) featuring Dorothy Granger, Mickey Daniels and Grady Sutton. In 1933 he moved over to RKO where he started out directing shorts starring the likes of Edgar Kennedy. His first feature there was 1933’s The Cohens and Kellys in Trouble with Charlie Murray. Notable also were Kentucky Kernels (1934) and The Nitwits (1935) both featuring Wheeler and Woolsey.

But Stevens chafed at flat-out broad slapstick; this was one of the reasons he had broken away from Roach. He wanted to get into deeper areas. Alice Adams with Katharine Hepburn (1935) was his first experiment of this type; though still comical it is rich in characterization and even pathos. The change put him on a trajectory that would last another 35 years.