How to Beat the High Cost of Living: Remembering the Great Inflation 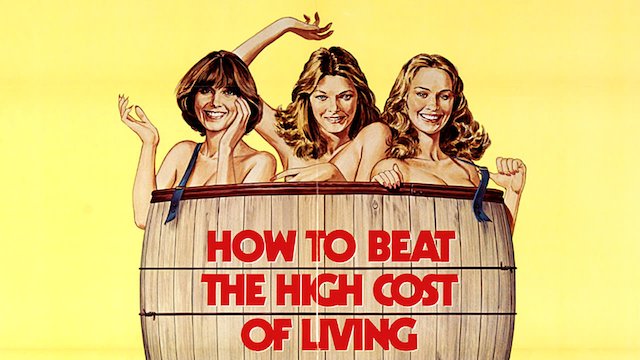 Having nothing scheduled in the pipeline today, I thought it would be entertaining to resurrect an artifact I stumbled across when preparing my Dabney Coleman post the other day. I hadn’t thought of this movie, I don’t think, since it came out, but in retrospect it feels like a forgotten gem. And this year it turns 40 years old: How to Beat the High Cost of Living (1980).

Screenwriter Robert Kaufman had a string of successful and/or notorious scripts under his belt: Freebie and the Bean (1974), Harry and Walter Go to New York (1976), The Happy Hooker Goes to Washington (1977), and Love at First Bite (1979). After nearly a decade of hawking this script around, American International Pictures (AIP) made it, their last film before merging with Filmways, wiping their much loved brand out of existence. And the wonderful thing about this film, besides the great quantity of beloved comic performers, is the MOMENT, for it catches many of them in a time of great transition. It stars Jane Curtin, fresh off Saturday Night Live and four years out from Kate and Allie (Garrett Morris of SNL also has a cameo scene. It’s the same year as Wholly Moses, a similar opportunity for Laraine Newman); as well as Susan St. James, fresh off McMillan and Wife and destined to co-star with Curtin on Kate and Allie; Jessica Lange in only her third film role (following King Kong and All That Jazz) with the mega-hit Tootsie just ahead of her; Dabney Coleman, as we mentioned, fresh from Mary Hartman Mary Hartman and its spinoffs, also to appear in Tootsie; Fred Willard, who’d also been on the Mary Hartman spinoffs but was then best known as one of the hosts of Real People, with his entree into the Christopher Guest universe four years ahead of him in This is Spinal Tap. For Richard Benjamin the film captures one of the last films of his period of stardom, just prior to his becoming a popular director with My Favorite Year (1982). Art Metrano, mostly known for his turns on variety shows, was about to do Mel Brooks History of the World Part One and the Police Academy Films. For Catherine Damon, it was near the end of her run on Soap; it was also near the end of her life; she would be dead of cancer 7 years later. Incredibly senior citizen/ show biz veteran Eddie Albert, also in the cast, had another 25 years ahead of him. Another vetrean in the cast was Ronnie Schell, who, like Coleman, had been on That Girl, though he’s best known for his role on Gomer Pyle USMC. His next film was to be The Devil and Max Devlin, with Bill Cosby and Elliott Gould.

So that’s the who. I haven’t even mentioned what it’s about. Well, that’s just as rewarding. It’s all baked into the title. It’s a snapshot of that moment I remember so well, The Great Inflation, which literally overshadowed my entire childhood. No word of a lie — the inflationary period lasted from 1965 (the year of my birth) and ended in 1982 (the year before I graduated from high school). It seemed like all you ever heard grown-ups talk about was how “a dollar doesn’t go very far”. It was chronic, it was like a national illness. Prices climbed, and money was weak. Anxiety was constant. The factors that fed into this were at least twofold: “Guns and Butter” spending at the Federal level (simultaneously funding the Vietnam War and countless new social programs, flooding the economy with cash), and the raising of gas and oil prices by OPEC. If you ever catch yourself wondering, as liberals often do, “How could anybody vote for somebody as horrible as Ronald Reagan?” THAT’s at least one of your answers. The Inflation ended in 1982 with a brief recession, the first of my lifetime, and then we entered something that felt like prosperity, a period that continues to this day. It’s an illusion of course. Reagan solved the problem by not paying for the spending. That’s what “lowering your taxes” means for all practical purposes, folks, since the politicians never stop spending (they’re spending worse than ever at the moment). We’re living the high life at the expense of our grandchildren. And though many of us now work 2 and 3 jobs to make ends meet, at least we’re not walking into the grocery store every week to find the prices have gone up again…and again…and again. I’m not staking out a position here. I’m just telling you the Great Inflation was a terrible feeling psychologically. Jimmy Carter actually went on TV to talk about our National Malaise, rather obtusely not noticing that he was one of the authors of it. 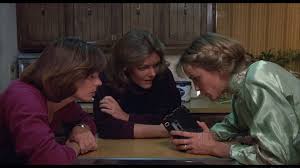 So that was the cultural moment. And TV and films dealt with it. In How to Beat the High Cost of Living, three women who are having trouble paying their bills band together to steal money from a mall. That’s the plot of it! In the first act, they suffer money woes; in the second, they plan a heist; in the third, they do the heist. This was a virtual subgenre in the late ’70s. The best example that springs to mind is the original Fun with Dick and Jane (1977) with George Segal and Jane Fonda.

The other theme in the film is useless or absent men, then a new theme in pop culture. Two of the women are divorced. Fred Willard plays a schmucky boyfriend. Dabney Coleman is a lecherous cop. Eddie Albert is a sponging dad. And Richard Benjamin sues his wife (Lange) because she has been borrowing money from him to support her failing business.

But like all movies…it’s a movie. In real life, these three gorgeous, witty women would probably NOT be the ones you have to worry about. They would probably be making out okay. (Look at them all naked in their barrel on the poster. They look like Charlie’s Angels). The working class people I grew up among? Those people were struggling.