The Performances of Ronald Reagan

When former movie star Ronald Reagan (1911-2004) was running for president in 1980, I had never heard of him before. I was 14, too young to have known him as a star. His last movie role, in The Killers (1964) was the year before I was born; his highly visible TV gig, host of GE Theater lasted from 1954 to 1962. He had made mostly forgettable B movies that had not stood the test of time. If, say, James Cagney or Jimmy Stewart had run for president in 1980, I would have been completely familiar with them. Those guys had careers that were comprised of long lists of classics. The best that can be said for Reagan was that he was in a couple of minor classics: Knute Rockne, All American (1940), and King’s Row (1942), neither of which I ever saw until long after he had ceased to be President. He was much vilified at the time for his worst film, Bedtime for Bonzo (1951), in which he was second-billed to a chimp. I think the first thing I ever saw him in was That Hagen Girl (1947) with a grown-up Shirley Temple. Since then I’ve probably seen ten or a dozen of his movies, mostly westerns, ranging from forgettable to not good.

Nor (as a kid) did I have much awareness of the political Reagan. Governors of California are always high profile, but Reagan had left that office at the beginning of 1975, when I was nine years old. A few months later he made a stir at the RNC, but, ya know, I was too busy watching Starsky and Hutch. The first time I recall seeing him was on The Merv Griffin Show, circa 1980, part of his campaign to remind people that he was likable, a show biz guy, which was necessary because he had spent the last several years establishing himself as rather a severe conservative scold. Reagan was way to the right of Nixon, and Nixon was a scary dude. These were the kinds of guys who ordered police in riot gear to go out and whack college girls on the head with truncheons, and who used law enforcement agencies to spy on civil rights and anti-war leaders as “subversives”. So, to help people forget those images, Reagan came out and told anecdotes about his Hollywood friends and so forth, and that undoubtedly worked on some people, even if it worked on some other people’s nerves.

But to me, he was always an enigma. As I said, he DIDN’T represent any kind of nostalgia or glamour to me. He was a stranger. And while people were always talking about how “accessible” and “approachable” he was, I never saw that at all. He seemed patently phony to me. You know those plastic Kennedy wig-things that Devo wore on their 1981 New Traditionalists LP?

Well, now you do! Anyway, that’s what he seemed like — plastic. He spoke of patriotic concepts I held and hold dear, but his version seemed canned. It didn’t seem genuine. It seemed Madison Avenue, like a pitchman hawking ketchup. But somehow that malarkey spoke to people, catapulting him first to the Presidency, then to a huge re-election win. I realized later that older people were getting reassuring echoes of what they considered a simpler time, World War Two and the Eisenhower years, an era of clarity, of good guys and bad guys. This is what the nation seemed to be looking to get back to: 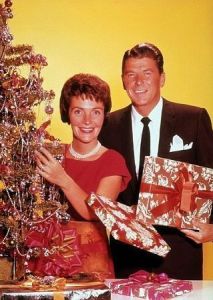 But I was born in 1965; the famous families I knew looked more like this:

The advent of Reagan and all that he symbolized had a discernible, palpable, immediate and observable effect on the popular culture. Suddenly men cut their hair short, and started sporting antiquated styles, things like bow-ties, suspenders, boxer shorts, seersucker suits. Cigars came back into fashion. Nudity and references to drugs evaporated from mainstream pop culture. These were also the years when the very word “socialism” became verboten in public discourse or policy and remained so up until just a couple of years ago, though it still has a ways to go to get where it was in the ’70s, when it was at least something people had conversations about.

For a period in my young adulthood I learned to appreciate Reagan’s sharply defined philosophies. Whether you agreed or not, there was never any question what he stood for (smaller government at home, and anti-Communism abroad) and that’s pretty rare. But still more palpable in the final analysis is the damage he’s done to this country, manifested on all sides, from his coded racism and not-so-coded racism, to his male chauvinism (to use an antiquated phrase of my childhood), to spreading a cynical, widespread hatred and demonization of the very government he served, giving aid and comfort (quite frankly) to homegrown terrorists, and assassins, leading inevitably to the present nihilistic neo-Fascist junta (ironically, one that seems devoted to making the U.S. a client state of Russia!).

Nowadays, I remain grateful for Reagan’s clarity — for it allows one to easily identify where our present troubles all began. A torch has been passed from one vapid TV star to another one, a hundred times worse. The process of making the symbol more important than the empirically REAL began with Reagan. I love show business, but it’s no more a way to run a government than Hershey’s Syrup is a healthy salad dressing.