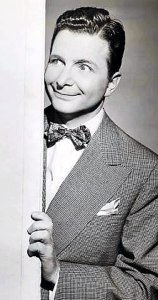 Fame requires a critical mass of the right sort of material to self-perpetuate, and this is my explanation for why Henry Morgan (Henry Lerner Van Ost Jr, 1915-94), a familiar figure in American pop culture for decades, is now almost completely forgotten. Morgan was primarily big on old time radio and TV game show panels. These, in and of themselves, are not formats that keep you alive in the public’s memory. New generations are not exposed to this stuff. They’d have no reason to know who you were. And then there’s the similarity of his name to Harry Morgan. And the fact that he shares the name with a pirate and a rum.

Still, for those familiar with his career, Henry Morgan was something of a legend. David Letterman had him on his show in 1982 and you could sense his reverence for the man, even though you could also sense that the audience had no idea who he was. Letterman was definitely an apple off Morgan’s tree. Morgan was famous for a dry and somewhat nasty wit on the air, and an indifference to whom he alienated (such as sponsors and network executives) behind the scenes. He was considered to be even more of a sour-puss than Fred Allen, somewhere further down the scale into H.L. Mencken or Robert Benchley territory.

Morgan started in radio in the early ’30s as a page, gradually working his way up to announcer jobs. He opened his shows with the self-deprecating greeting “Hello, Anybody!”, the subtle inference being that maybe just one person might be listening to his show (in contradistinction to performers like Kate Smith, who might open their shows with “Hello, Everybody“). On his shows throughout the 1940s, he would give running commentary on current events, make observational humor, and play records by people like Spike Jones.

Every so often Morgan dabbled in other film and television work. He narrated the 1952 documentary Coney Island USA. Habitues of of the Coney Island Museum know it — it’s often playing in their galleries on a loop. (Check it out now, it’s available on Youtube). He also had a decent role (third billed) in the 1960 crime film, Murder Inc., and was a regular on the 1970 sitcom My World and Welcome to It.

By the ’80s Morgan had burned a lot of bridges. (Just one humorous example: in 1972 he stalked off the set of The Merv Griffin Show merely because he was annoyed by fellow guest Charo). The Letterman appearance we mentioned above was his last television shot, and it’s an odd one. He has a black eye, and a band aid on his cheek and he claims to have fallen down some stairs. He seems a bit drunk, and he rambles to the point of embarrassing Dave. This too is on Youtube. (I’ve stopped linking because the links go dead, but you can find it there easily enough). Morgan’s autobiography Here’s Morgan! The Original Bad Boy of Broadcasting, came out the year of his death, 1994.

To learn more about show business history, please see No Applause, Just Throw Money: The Book That Made Vaudeville Famous, and for more on classic comedy and silent film please read Chain of Fools: Silent Comedy and Its Legacies from Nickelodeons to Youtube.