Unsuspected Riches in the Dossier of James Gleason 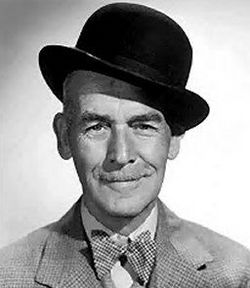 Movie fans who know and love James Gleason (1882-1959) as a crusty character actor in such films as Meet John Doe (1941), Arsenic and Old Lace (1944), and A Tree Grows in Brooklyn (1945) may be startled to learn of Gleason’s rich and varied resume not only as a performer, but as a playwright, screenwriter, director and producer over 6 decades.

Born in New York, he was the son of two actors, William Gleason and Mina Crolius Gleason, both of whom had acted with Charles Frohman’s company.

His early working life will surprise none of his fans who’ve seen Gleason play countless newspaper editors, flacks, and police detectives. Starting at 13, he worked as a printer’s devil, messenger boy and elevator operator. Thrust among these settings he knew whereof he spoke. And having seen him in the film version of Maxwell Anderson’s Yellow Jack (1938) and What Price Glory? (1952) I was not at all surprised to learn that he’d spent a good deal of his youth in the army as well, serving in both the Spanish-American War and World War One.

Gleason began his acting career in London. In 1905 he married actress Lucile Webster, with whom he would work professionally throughout his stage and screen career. In 1907 their son Russell was born; he, too, would follow his parents into the acting trade. Gleason began appearing in Broadway plays in 1914. In 1922 he got his first film credit, and his only silent one as an actor, with a small role in the Anita Loos–John Emerson film Polly of the Follies starring Constance Bennett. (A decade later he would appear in the similarly titled Blondie of the Follies, also co-written by Loos)

In 1925 his play Is Zat So? debuted on Broadway, with himself in the cast, as well as Robert Armstrong (King Kong), with whom he would later co-star in the radio sitcom Gleason and Armstrong in 1931. Is Zat So? ran on Broadway for a year and a half. While this show was still running, another play of Gleason’s was produced, The Fall Guy (1925) which ran a respectable four months, and he directed the original production of George S. Kaufman’s The Butter and Egg Man (1925-26). With partners Earle Boothe and Ernest Truex he produced two plays in 1926, Pomeroy’s Past and Sure Fire, which apparently wasn’t.

Then, several huge, breathrough credits: he co-starred with his wife Lucile in his play The Shannons of Broadway which ran a year and a half (1927-28) and was made into the eponymous 1929 film as well as the 1938 musical Goodbye Broadway. That same year of 1927, Is Zat So? was made into a silent film with George O’Brien, Edmund Lowe, and Douglas Fairbanks, Jr. And in 1928, he wrote the book for Joe Cook’s hit musical Rain or Shine, which was made into a movie in 1930. This was his last Broadway credit.

From here he went out to Hollywood, where he worked as an actor, screenwriter, and on a few occasions, director. He wrote some of the dialogue for Broadway Melody (1929) and has small role in the film. Starting in 1929 he co-starred in a series of comedy shorts with Lucile, some of which he co-wrote and/or directed. The last of the shorts came out in 1933.  The film of the Shannons of Broadway came out in 1929.  In 1930 he appeared in, and supplied dialogue to Puttin’ On the Ritz, starring Harry Richman. He co-wrote the screenplay to The Bowery (1933).

He was a regular in several film series: the Hildegarde Withers mysteries (1932-37, with Withers variously played by Edna May Oliver, Helen Broderick and Zasu Pitts); the Higgins Family comedies (1938-1941, with Lucile and their son Russell as well as Harry Davenport); and two of the Joe Palooka pictures (1950-51)

James Gleason passed away n 1959, having outlived both his son Russell (who died in a tragic accident in 1945), and Lucile who died in her sleep in 1947. Neither of those sad events seemed to have slowed him down any. This was clearly a guy who lived for his work.