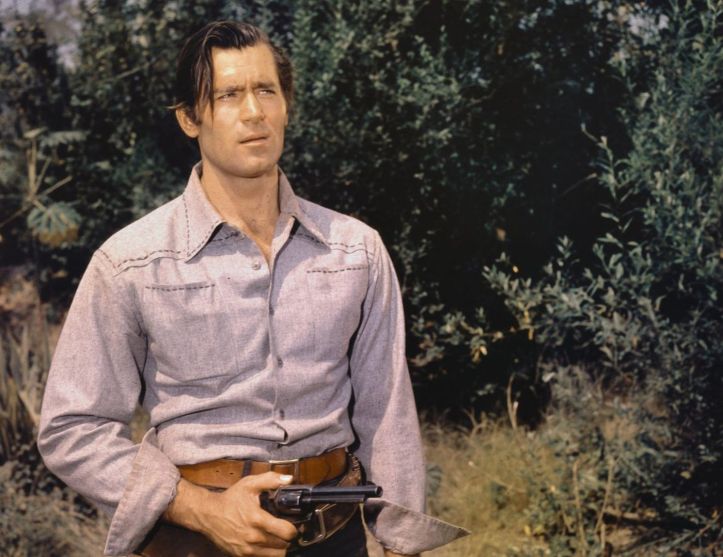 Today we celebrate Clint Walker (1927-2018), who passed away just a couple of years ago. Walker was a star I particularly liked. He had a kind of personality that convinced you he was uncomplicatedly good (sort of clean-cut, all-American) combined with the fact (and I’m not ashamed to say it) that he was a perfect specimen of physical manhood, not just handsome, but insanely large: six foot six inches tall, and yet perfectly proportioned, not skinny or fat as such tall men usually are (e.g., Fess Parker and Jimmy Stewart on the thin side, and all those ex-football players on the fat side). His arms were like most beefy guys’ legs. It’s fairly crazy that he wasn’t tapped to play Superman — he would have made a better Superman than any other actor I can think of, including the guys who actually played him. The extremism of his physique definitely paves the way for, say, a Schwarzenegger, although Walker’s size was seldom exploited in that way or to that extent (although he was frequently photographed with his shirt off).

As an actor, Walker had an almost identical appeal to Jon Hamm’s. I seldom look at the latter without thinking of the former, and as Hamm flounders in his post-Mad Men career, I keep thinking “Do westerns, man! Do westerns!”

For westerns is what Walker was primarily known for — he starred as the title character in Cheyenne on TV from 1955 to 1963. Cheyenne was the first hour long tv series to last more than a single season, and also the first hour long TV western. James Garner was originally intended for the title character but could not be reached, so Walker, whose only previous credit was as a Tarzan knockoff in the Bowery Boys film Jungle Gents (1954), got the role. Cheyenne was just a guy who knocked around the west on his own doing good deeds. The show was so popular, it ran for EIGHT YEARS. It had something going for it. The appeal was Walker.

Blessed are the Peacemakers; Requiescat in Pacem.