Thoughts on “Leave it to Beaver” 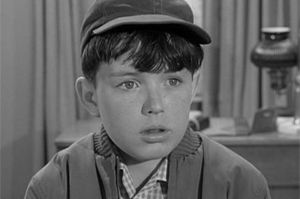 I wasn’t yet born during the original run of Mathers’ great claim to fame, Leave it to Beaver (1957-1963); I began to watch it in syndicated reruns about a decade after the initial broadcasts. The most astounding thing to me then and in retrospect was how close the show came chronologically to my own birth (1965), for it seemed, like all of the ’50s seemed, to have taken place a hundred years earlier, not just a very few. The ’70s were a time of sex, drugs, scandal, the apparent failure of every American social and political institution. America lost a war. The President was a crook who resigned in disgrace. New York City was going bankrupt. Prosperity was slipping away. On and on and on.

Leave it to Beaver, which ceased production just two years before I was born, depicted an idyllic alternate universe of manicured lawns and picket fences. While the show’s boy hero Theodore “Beaver” Cleaver was constantly in trouble, much like Tom Sawyer or Dennis the Menace, the world’s troubles were outside of his bubble. That’s key, I think. It’s not as though the world, or America, was untroubled in the ’50s. Yes, in many ways things were more stable. Ye Gods how I have PINED over the course of my life for a President like Eisenhower or JFK. And to take prosperity for granted! But troubled race relations, the nuclear threat and much more were hanging over everyone’s heads then too. It simply wasn’t the business of this particular show.

What was? The point of view of kids. And it did its job very, very well, I think. As different and idealized as the show was from my own life, I still identified closely with the kids at its center. As an adult, you watch it and you’re amused at how scared and worried the young people are all the time when they cause relatively minor trouble. But that is the scale of their world. And who wants to be in trouble? And the show’s creators, producers and principal writers Bob Mosher and Joe Connelly drew the situations from real life — it constantly resonated with the kinds of predicaments I could relate to. It was the dumbest stuff. Plots I remember: in one episode Beaver sticks his head through a fence and gets stuck there all day. In another, he defies his mother and wears a sweatshirt with a picture of a monster on it to school. That sort of thing. And they were structured as these moral homilies. The kids know what’s wrong, they do wrong anyway, and then they receive instruction from their concerned but understanding parents at the end. This is how it generally went.

Many of the other parents on the series were not as well-balanced as the Cleavers were, and sometimes even the Cleavers lost their cool. I remember being alarmed in an early episode, perhaps the first episode in season one, where father Ward Cleaver (Hugh Beaumont) chases Beaver up a tree or something, threatening to whup him. But it almost never went down like that. Usually Ward would sit the troublemaker down in his study and give him a reason-based talking to. And he would often confide to his wife, played by Barbara Billingsley, that he’d been guilty of the very same mischief when he was a boy. I grew up in a house where the parenting style could be fairly unhinged, to put it mildly. I studied and admired the contrasting example of the Cleavers.

Interestingly the show Mosher and Connelly had worked on prior to Leave it to Beaver was Amos ‘n’ Andy. They went from working in this pseudo-black vernacular, where nearly the whole cast was African American, to a pretty much all Caucasian show. And the Cleavers were also financially secure. Taking the kid’s perspective, we don’t know precisely what Ward Cleaver does, but it’s definitely white collar, and the mother, June, keeps a spotless middle class house. The Adventures of Ozzie and Harriet and Father Knows Best are usually the lightning rods for the “propaganda Americana” discussion, although Leave it to Beaver was just as “white ‘n’ wealthy”. I think Beaver avoids some of the critical potshots because it had a very specific focus. It wasn’t about a “perfect” family. It was about a kid who wasn’t perfect.

The other thing the show did beautifully was give us this wide, hilarious gallery of other kids, which is really one of the major joys of the show. They’re often the ones who entice the rather guileless Beaver into hot water. As a grown-up I find Beaver’s older brother Wally (Tony Dow) very funny now, in a way I simply didn’t get when I was a kid. The writers mined a LOT of humor from slang, and it was kind of a new concept at the time. This, too, is in the tradition of Twain. When Wally says something like “Get OUTTA here, ya little creep!” or whatever, it was slightly shocking at the time, enough to be laughter-provoking. And their various friends are calculated for maximum plot shenanigans. Best remembered is the sycophantic and singularly nasty Eddie Haskell (Ken Osmond) — why is Wally even his friend? Then there are the Rutherfords: Ward’s coworker, bald bespectacled Fred Rutherford (Richard Deacon, later Mel on The Dick Van Dyke Show), and his son Lumpy (Frank Bank), who was Wally’s friend; and daughter Violet (Veronica Cartright) who was Beaver’s antagonist.

Rusty Stevens played slow-witted, overweight Larry Mondello, Beaver’s closest friend, but there were also Whitey and Tooey (played by the Farara brothers, Stanley and Tiger) and Gilbert (played by Lyle Talbot’s son, Stephen). Jeri Weil was especially memorable as Judi Gensler, a kind of Nellie Olsen prototype, simultaneously a cruel bully, a tattletale, and a halo-wearing goody-goody. Sue Randall played their kind, understanding teacher Miss Landers, who was cast in the same mold as the Cleavers. The kids universe is so filled out it approaches Our Gang in its thoroughness.

Above all there was Mathers, whose mark was indelible. He was an extremely good child actor, and you can see him in several movies that were made prior to Leave it to Beaver: Bob Hope’s Son of Paleface (1952), The Seven Little Foys (1955), and Alfred Hitchcock’sThe Trouble with Harry (1955), among them. He had this wonderful halting, quizzical quality about him as though every interaction were a puzzle with consequences he worried about. I was delighted when he came back as an adult to do Still the Beaver (1983) and The New Leave it To Beaver (1983-89) and he STILL had this quality, as though he were the 8 year old Beaver trapped in a man’s body. But let’s be honest. Isn’t that what we all are?