15 Mae West Films That Never Got Made

For over 80 years, Mae West has ruled the screen, as one of the pantheon of so-called “classic comedians”, as one of the top female comedians of all time, and as a boundary breaking pioneer of free speech for both the stage and screen. It was the latter credential that accounts for her small cinematic legacy: only 9 starring vehicles, one co-starring vehicle, and two appearances as a supporting actor. If it were left up to West, there would have been many more pictures to her credit– if movie producers had had the cojones to shoot them. Here are some of her notorious never wases.

In a way, this film was made, and in a way it wasn’t. Prior to her film career, West was best known for her 1928 smash hit Broadway show Diamond Lil. Like all of her early stage vehicles, the play got her into trouble with the law and garnered many headlines due to her special brand of risque comedy. Her first starring film (initially called Ruby Red) was pretty much an adaptation of Diamond Lil, but Paramount executives were querulous about having the movie be so closely tied to the very notoriety they’d hired her for. By the time the film made it to the screen in 1933, it was in the form of the much cleaned up She Done Him Wrong. Still, Mae cherished the original play. She revived it onstage in the 1950s, and was still trying to get the original version made into a movie as late as the 1960s.

It Ain’t No Sin

I love the title of this so much, I wish they’d kept it.  This was an adaptation of Mae’s 1931 stage play The Constant Sinner, based on her 1930 novel Mae Gordon — about miscegenation! Of course, Hollywood was too terrified to take that on, so they made Mae’s boxer-lover character white, renamed it Belle of the Nineties, and cut out all the good parts. The bowdlerized film came out in 1934.

The Queen of Sheba

Mae hoped to play the title character in her version of the Biblical tale as a follow up to Belle of the Nineties. Paramount wouldn’t hear of it (although she did get to sing the park of Delilah in an opera scene in her next film)

Gone With the Wind

Yes! Believe it or not, Mae was strongly considered for the part of Belle Watling by MGM executives (or maybe it was just the publicity people), but either Mae or producer David O. Selznick balked, or they both did.

Mae originally planned this as her follow up to Go, West Young Man, with herself playing the title character of Catherine the Great. She revived her hopes again in 1939, never dreaming that her time as a solo star was already over.  With her movie career on ice, she finally brought her script to the Broadway stage in 1944. This is perhaps the most painful one of all. She had a script, she played the part…but it was never filmed so we don’t get to see her in it. I bet it was fantastic. 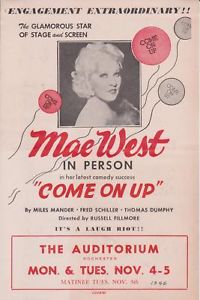 Another disappointment. This was Mae’s follow up stage vehicle to Catherine in 1946, in which she played a lady spy. She barnstormed with the play for 9 months, but this one didn’t even make it to Broadway.

Billy Wilder originally wanted Mae for the role of Norma Desmond, but after discussions he realized she wouldn’t be right — Mae only ever played herself.

Billy Wilder also consider a version of the popular musical Pal Joey with Mae West in the role that later went to Rita Hayworth, and Marlon Brando in the Sinatra role. In this case, the studio passed. 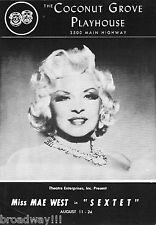 As you know, this was rather notoriously filmed in 1978, when Mae was 85 years old. But she had written it in 1952 and performed it as a play in 1961. A film made in either year would likely have been more in line with Mae’s original intentions, i.e. less of a freak show, if less “free” about the sexual content.

The Art of Love

Producer Ross Hunter reportedly wanted Mae for this 1965 comedy starring Dick Van Dyke, but they hit an impasse when Mae wanted to rewrite all her lines. The part went to Ethel Merman.

Juliet of the Spirits

Federico Fellini reportedly wanted Mae for a role in this film but it didn’t come to pass.

Elvis Presley really wanted Mae to play the lady carnival operator in this 1964 musical, but Colonel Tom Parker scotched the deal, claiming that Mae would steal the picture from him. (More likely the pair would have produced screen magic as had his pairing with Ann-Margaret in Viva Las Vegas). The part wound up going to Barbara Stanwyck – – who hated Elvis!

A pornographic film announced by columnist Rona Barrett as Mae’s follow up to Myra Breckinridge, when Mae was pushing 80 years old. [Note: Someone wrote recently to supply the crucial information that I’d misspelled the title to the latter film. Bulletin to all readers: I don’t care! In fact I prefer to leave it as it is, in case it drives you up the wall.]

In summation, I wanna see all these movies! (with the possible exception of Dinah East. And I’d even like to see about ten seconds of that!)