The Thanhouser Studio and the Birth of American Cinema 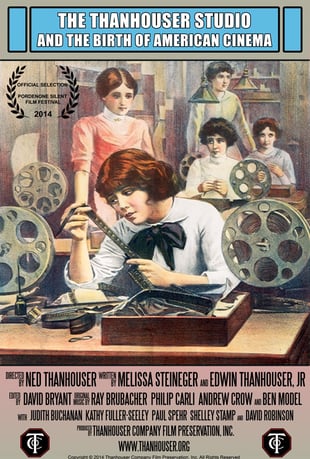 As readers of this blog know, an area of especial interest to us is the connection between the ancient art of theatre (with all its myriad manifestations…(clowning, high melodrama, vaudeville) into the younger arts of cinema, radio, television and web-video. If you haven’t noticed that, let me take this opportunity to tell you!

So this won’t be so much a review of the recent documentary The Thanhouser Studio and the Birth of the American Cinema, as a simple plug. The film conveys a wealth of information that any silent movie fan will be delighted to hear, and it is all told succinctly and entertainly. It contains revelations. I had seen perhaps three Thanhouser films in my movie-watching career…I had no idea that they were one of the top independent producing companies in the country between 1909 and 1918, or that they had produced over a thousand movies. I had heard of one of their stars (Florence La Badie) chiefly because she only recently got a grave marker at Green-wood Cemetery. But I hadn’t realized that the famous director James Cruze (The Covered Wagon) got his start working as an actor at Thanhouser, or that one of their biggest stars was “The Thanhouser Girl”.

Also: the studio operated during an interesting time….the transitional period between the early operators (Edison, Biograph) and the industries to Hollywood, the shift to features, and the genesis of many brand new studios (such as Famous Players-Lasky, later to become Paramount). And above all, most endearing the portrait of the company’s founders, barnstorming actors Edwin and Gertrude Thanhouser, who were lucky enough to get in on the ground floor of a brand new industry, but weren’t quite equipped to hang on to that bucking bronco once it truly started to take off in the late nineteen tens. Magically, it’s narrated (and directed and produced) by their grandson Ned Thanhouser, who holds the reins of the company today. Amazingly, somewhere in the neighborhood of 150 Thanhouser films are still known to exist are more are being discovered all the time.

For more information on all things Thanhouser and to get your copy of this doc as well as many of many of the original films from Thanhouser Studios (on DVD), go to Thanhouser.org