Mae West in “She Done Him Wrong”

I think most people agree that Mae West’s first starring vehicle She Done Him Wrong (1933) is also her best film. It was based on her 1928 Broadway stage hit Diamond Lil (the reputation of which was so controversial Paramount changed its title even BEFORE the new Production Code.) In 1932, Mae also turned Diamond Lil into a novel:

To distance the film from the play’s scandalous reputation, it was retitled She Done Him Wrong in the film version, and Mae’s character’s name was changed to Lady Lou. It’s directed by stage and screen vet Lowell Sherman. As can be expected there’s a lot of pre-marital or just plain extra-marital sex hinted at, and some of it out and out talked about. It’s set in a Bowery saloon during the 1890s. One of my favorite parts of the film is Mae’s two songs: a hot rendition of the old traditional song “Frankie and Johnny” and an equally sizzling version of the Shelton Brooks song “I Wonder Where My Easy Rider’s Gone”, first popularized by Sophie Tucker. 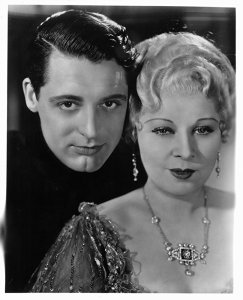