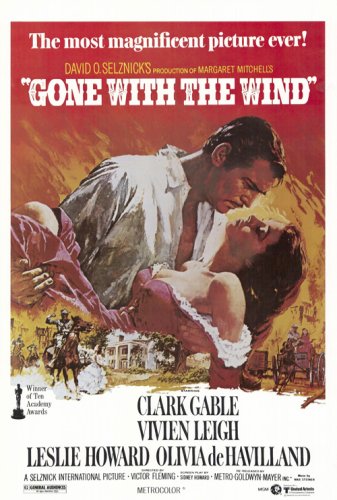 This coming Sunday, December 15 will mark the 80th anniversary of the world premiere of Gone with the Wind (1939), which was held, somewhat symbolically, in Atlanta. We jump the gun a little in posting today because TCM is screening the film tonight at 8pm (EST) and again tomorrow at 4pm (EST).

The poster above announces that it is “The Most Magnificent Picture Ever” — and this is certainly one of the few instances where such a claim could plausibly be made, even if it is not 100% indisputable. That it remains in the running, still on the shortlist, after all this time, remains impressive. I first saw it as a child during its television debut in the mid 1970s. The film was already 35 years old at that point, and television had been popular for 25 of those years. The long delay in showing it on TV was due to the fact that the film still remained a box office draw (it had been re-released in cinemas in 1942, 1947, 1954, 1961, 1971 and 1974) and its long-running time (221-238 minutes depending on what you included) made it unwieldy. The first time I saw it, it was divided into two parts, shown on consecutive nights, with commercial interruptions. But even hobbled in that fashion, it made an enormous impression.

There’s no denying the film’s problematic nature. My family’s background is one of the reasons I am sensitive to it. My father was from the South. Among my Southern ancestors and relatives are a range of types represented in the film: slaveholders, plantation owners, overseers, poor white trash, and others (not well represented in the film) who fought for the Union. My family lived one county over from where the Ku Klux Klan was founded. The founder of Selma, Alabama was my 6th great uncle. I am related (by marriage) to Edmund Pettus. A lot of people with my background choose to double down on the sins of the past, to defiantly express pride in this legacy of organized oppression. I think it’s an understatement to call this attitude misguided — it’s to take belated part in one of the greatest large-scale crimes in human history. And as I say, I have no shortage of Southern ancestors and relatives of that time to actually be proud of. One of them was Newt Knight, immortalized in The Great State of Jones, who fought a guerilla war against the Confederacy and later formed a mixed-race community in Mississippi (at a time when that was illegal). This, not some Medieval fantasy of white supremacy, is what ought to be celebrated.

Any way you slice it, Gone with the Wind goes too easy on slavery. In certain ways it was progressive for its time, but still it gives the Peculiar Institution a pass. Sorry to be a kill-joy on the topic of your pretty costume epic, but talking about it without dealing with the oppression of African Americans is LITERALLY analogous to setting a movie in Germany in the ’30s and ’40s and not being judgy about the Holocaust. It’s a bitter pill to swallow, but swallow it anyway. The book’s author Margaret Mitchell was diabolically savvy in crafting a vehicle that would appeal to both North and South, male and female. It was tailor made for Hollywood. At the time, it was a commonplace strategy to tell Civil War stories from the point of view of the South, and hedge their bets by being sympathetic toward the Confederates while being mildly reproving of their “stubborness”, though their racism, not so much (given that there was also ample racism in the North). Films from Buster Keaton’s The General through countless westerns starring Randolph Scott or John Wayne take this approach.

The extent to which GWTW was relatively progressive on this score is that it took the rare step of making at least one of the characters, Mammy (Hattie McDaniel) a main character, with thoughts and feelings of her own. She might be characterized superficially as a stereotype (her name is Mammy after all), but her behavior impacts the other characters. She’s not just there for comic relief, despite her rustic manner of speaking. McDaniel won an Oscar for her performance. Some Southern theatres banned the film due to Mammy’s frank and free ways in speaking to her white masters and mistresses. But the fact that the O’Haras own her puts the lie to the idea of her freedom. The saintly, kindly liberal attitude they show toward Mammy and the other enslaved people on the plantation (Butterfly McQueen, Eddie “Rochester” Anderson, Blue Washington, Ernest Whitman, Oscar Polk, etc) would have to be deemed a grotesque distortion of well documented reality.

So, Gone with the Wind must rank with Uncle Tom’s Cabin and The Birth of a Nation as a tarnished American epic. Millions suffer in the background, but our main interest is in following the travails the fiery, vain, hilariously selfish Scarlet O’Hara (Vivien Leigh), who eventually redeems herself by becoming the ultimate scalawag capitalist. She worships the old planter aristocracy as represented by Ashley and Melanie Wilkes (Leslie Howard and Olivia de Havilland ) but they wither and fade away like gossamer ghosts, while she, the hard-headed Irish colleen, thrives in the new cash culture of commerce unleashed by the fall of the slave economy. In this her tutor is the charming rogue Rhett Butler, played by Clark Gable with bemused cynicism, as though he stepped straight out of Mitchell’s book. The love triangle betwixt Scarlet, Ashley and Rhett is played out against the backdrop of the Civil War, from storm clouds, to the unsheathing of the sabers, to dark days of privation, to apocalyptic devastation, to recovery. As one might expect from a Technicolor MGM epic, some of the film’s most memorable moments are visually stunning set pieces, including the burning of Atlanta, a huge writhing pile of Confederate casualties, and Scarlet’s return to the family plantation Tara only to find it a burned out, spooky ruin, occupied by her once proud father Gerald (Thomas Mitchell) who has become a shell-shocked wreck.

There is a cast of thousands, and we’ve written about several of them, such as Laura Hope Crews,(Aunt Pittypat), Harry Davenport (Dr. Mead), and Ona Munson (Belle Watling). Also in the cast in much smaller supporting parts are Cliff Edwards, Rosco Ates, George Reeves, Charles Middleton, Si Jenks, Ward Bond, and Yakima Canutt, among others. Sidney Howard won a posthumous Oscar for his screenplay. Astoundingly, Victor Fleming directed it at the same time he was directing The Wizard of Oz.

But the bottom line of this movie, as impressive as a piece of industrial film-making as it is, is that “the Yankees” are made out to be the villain of the piece. A small detail perhaps, but the Yankees were actually the good guys during the Civil War. The dark times we’re living in now are the best evidence that we dare not be irresolute on that point.

For more on this hot topic, see my friend John Devore’s take here.