Ona Munson: Ended It All with Pills

Ona Munson (Owena Wolcott, 1903-1955) started out in vaudeville, making her way from her native Portland, Oregon to Broadway, where she was in the chorus of George White’s Scandals in 1919. More years of vaudeville followed, and then a terrific string of hit Broadway shows: No No Nanette (1925-26), Twinkle Twinkle with Joe E. Brown (1926-27), the title character in Manhattan Mary (1927-28) with Ed Wynn, George White, Mae Clark and Lou Holtz; and Hold Everything (1928-29) with Bert Lahr, in which she introduced the song “You’re the Cream in My Coffee”.

Though rumored to be part of Nazimova’s lesbian “sewing circle” she was married to fellow former vaudevillian and movie director Eddie Buzzell from 1926 through 1931.

Naturally her first film, Going Wild (1930) with Joe E. Brown was originally a musical, but the songs were cut at the last minute when musicals went out of favor. Three more movies followed in this early period: The Hot Heiress with Ben Lyon, Broadminded with Brown, and Five Star Final with Edward G. Robinson, all 1931. 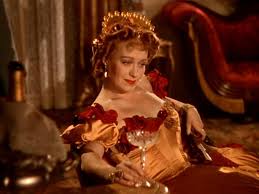 Munson returned to Hollywood in 1928 to co-star with Charlie Ruggles in His Exciting Night (1938). The following year, she was cast in what is probably her best remembered role, Belle Watling, the big-hearted madam in Gone with the Wind. Of her dozen or so other parts, that of “Mother” Gin Sling in The Shanghai Gesture (1941) may be best remembered. The Red House (1947) with Robinson was her last film. Munson last Broadway play was the short-lived First Lady (1952). She took various TV parts through 1953. She married her third husband, designer and painted Eugene Berman, in 1950, at the home of Igor Stravinsky.

In early 1955 Munson committed suicide by taking an overdose of sleeping pills. She left a note that read: “This is the only way I know to be free again…please don’t follow me.”

To learn more about vaudeville and musical theatre, please see No Applause, Just Throw Money: The Book That Made Vaudeville Famous