Somebody: The Reckless Life and Remarkable Career of Marlon Brando 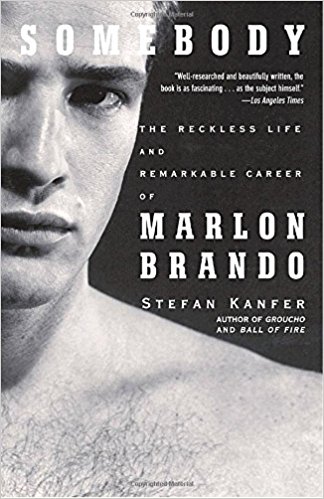 If there ever was a meaty (first beefy, then fatty) subject for a biographer to sink his teeth into it has to be Marlon Brando. Crazy as a bedbug, brilliant as a Wogglebug, he reinvented an entire art form and became a poster boy for disaffected youngsters everywhere — all done at the same time, and with a sneer on his face.  Stefan Kanfer’s recent book Somebody: The Reckless Life and Remarkable Career of Marlon Brando focuses on Brando the neurotic, a perspective that, while narrow, is nevertheless thought-provoking.

Adroit film buffs will recognize the reference in the book’s title; it is what On the Waterfront’s mixed up boxer Terry Malloy wishes he was (in addition to a “contender…instead of a bum, which is what I am…”) Kanfer expertly teases out the thesis that the truth of those lines on the screen sprang from the fact that that was how Brando really felt about himself. The son of a womanizing traveling salesman and a self-involved, alcoholic housewife, Brando was an actor who forever sought attention by acting up and acting out. Repeatedly told by his father and nearly all of his teachers that he would never amount to anything , he turned to acting almost out of desperation, the stage being one of the few professions that actually rewards social misfits. Almost overnight he became acting guru Stella Adler’s star pupil, a phenomenon on Broadway, and a major Hollywood star. But old habits die hard. Unable to trust the adulation, he left that chip on his shoulder right where it was – kept it there, in fact, to his dying day. On its face, his constant denigration of the actor’s art might look like a kind of integrity, but it never quite proved to be that. For Brando wasn’t merely putting down his own performances in pursuit of some higher vision of art. Instead, he cynically knocked the entire profession itself, happy to earn millions of dollars for practicing a worthless craft if that was how the suckers wanted it.

Ah! But to what extent did he practice a craft? Brando’s lack of discipline was infamous, although when the perverse mood struck him, he would show off just how disciplined he could be just to screw with people’s heads, as when he played Marc Antony to Gielgud’s Cassius and showed he could be as boring as all the other musical comedy leading men in Guys and Dolls. Kanfer misses this major point a couple of times when he quotes admirers’ hushed reports of Brando’s “transformations” into “other people”. On the contrary, in the cinematic record at least, what Brando seemed best at was being himself. In his youth, his animal magnetism served him well in roles like Stanley Kowalski, Terry Malloy, and the iconic hoodlum in The Wild One. But the proof of the pudding to my mind was his middle period, in a film like Mutiny on the Bounty where he was both literally and figuratively at sea. By the 1960s, the world was full of Brandos and Brando himself, though just as adolescent as ever, was too old to play a juvenile delinquent. The limits of his “craft” manifested themselves in each succeeding picture as he played no end of unconvincing cowboys, southern sheriffs, aristocrats, playboys….the public wasn’t buying it. I find it telling that his comeback in the early 1970s came by playing a gangster in The Godfather and a sexoholic in Last Tango in Paris. It is proof to me that his art was somehow about his image, about Brando himself. In contrast to Olivier (whose name was often paired with his on a two-name list of the world’s greatest actors) his bag was not subsuming his identity into other characters at all. At parts that expressed the rebel Brando, he excelled; in all other parts, he was dreadful, self-conscious, bewildering.

As Kanfer skillfully relates, this same self-indulgent capriciousness marred other aspects of his public and private life. A famous political dabbler, Brando repeatedly proved himself adept at knocking things down, but clueless about how to build things up. His most famous act of activist chicanery was sending Sacheen Littlefeather to refuse his Oscar on behalf of Native Americans. If he ever used his influence or his millions to build some sustaining superstructure that would actually improve the health, income and morale of Native Americans, the world is unaware of it. One of Kanfer’s best insights is his comparison of such ineffective showboating with the career of the mature Paul Newman, another method actor who’d portrayed rebels in his youth, but whom (unlike Brando) actually founded a major charity that changed thousands of people’s lives. Brando, it appears wanted to be “somebody”…without actually doing anything.

Likewise, Brando’s personal life was a chaos of tragedy and waste, with a string of  wives and concubines, a suicide for a daughter, a drug-addled murderer for a son. The product of a dysfunctional home, Brando reacted by building a dozen dysfunctional homes from New York to Tahiti. Disdainful of his imperfect father, he responded by being an even bigger failure as a father by an order of magnitude.

Brando never ceased to be a child. That is fine so far as it goes. It’s also true of Elvis, Howard Hughes, Marilyn Monroe, Michael Jackson, and any number of our untethered, loony tunes, millionaire celebrity class. In fact, nearly all of them. What of it? Here we get less guidance. Kanfer’s book does provide a lot of context, perhaps 25% of the book, in the form of contemporary historical details. This may help the book’s longevity, but it still doesn’t get at the crux of the most important aspect of the Brando phenomenon: the meaning of his image. Why is he the subject of one of Warhol’s earliest silk screens? What is it about him that inspired both Elvis Presley (a cracker from Tennessee) and John Belushi (an Albanian from Chicago)? In the 1940s, men and women dressed – not just when they went out on dates, or when they went to work or church, but whenever they were seen in public. Brando startled everyone he met by showing up in jeans and a tee shirt. It’s since become the universal American uniform.

Brando is like Milton’s Satan or the Prometheus of Aeschylus. Long before his imitator James Dean, he was a “Rebel Without a Cause”. But what is that, but to say “no” just because someone else has said “yes”? Americans had always worshipped rebels, but usually ones with causes. Unhitched to anything good or valuable, antinomianism for its own sake is mere destructiveness, nihilism. And, after all, if you aren’t already “somebody”, then you must be nothing, a void. Kanfer makes a fleeting reference to Ahab in the book and I wish he’d gone much further down this path. For I think it is possible that Brando’s art (and his life) come closest to Melville’s – an exploration of his (and America’s) dark side. We see it at it’s peak in Brando’s insane, rambling, brilliant speeches as Colonel Kurtz in Apocalypse Now – all, according to Kanfer, largely improvised. The former biker who terrorized small American towns in The Wild One is now cut loose to do it on a larger scale in the villages of Vietnam. Art and madness have become one. It’s fine on the screen, but potentially dangerous as a real world credo.