This gentleman (born today in 1819) is one of my literary heroes.

A tribute to this is the fact that my interest in him survived an introduction to his great masterwork at the hands of an incompetent doofus in my senior year in high school, a supercilious oaf with the appropriate name of “Mr. Dick”. I detested this teacher so much that I dropped out of advanced placement English (and English, after theatre, was my favorite subject). But while Moby Dick has been tarnished at the hands of several film-makers, it proved to be impervious to the fumblings of Mr. Dick. I have re-read it periodically since then: my current copy is as well thumbed as Melville’s King James Bible and Shakespeare must have been. It’s long been my dream to play Ahab, at least in a radio adaptation if not in a stage version or (infinitely unlikely) a screen one.

The other Melville role I’ve been steadily, stealthily devising for myself is the title character(s) in his last novel The Confidence Man, a masterwork even more experimental and difficult than Moby Dick. I have worked up an adaptation of my own, which I first presented on the 150th anniversary of the book’s publishing, April Fool’s Day 2007 at Coney Island USA. I subsequently did a smaller reading at the Metropolitan Playhouse. I first discovered the book in the early 1990s, fortuitously at the height of my Barnum phase, and I, too, re-read that one periodically, as I continue to develop it for future production.

Melville’s career is one of the first to confront the perennial problem of the American artist, an internal struggle between the two American ideals, Democracy and Freedom. Give the People What They Want? Or To Thine Own Self Be True? Happy indeed is the individual for whom the two coincide, or who can strike a balance. Melville’s career was a sickening see-saw, and then a slide, between the ideals. His first works (Typee, Omoo, Mardi, Redburn and White-Jacket), purportedly based on his real adventures as a sailor in the South Seas, were for the most part successes. When he wrote in this mode, his books sold and he enjoyed some income from his work. It’s easy to see the appeal of these early works. They have aspects of travelogue, being among the first to take us to exotic, faraway corners of the globe. They have aspects of expose: as in Dana’s Ten Years Before the Mast we are shown the harsh cruelties inflicted on sailors by their officers, a fact of life Melville, an educated man from a good (if fallen) family, was especially sensitive to. They have aspects of autobiography of a man of action, a new concept in literature, replacing the outworn paradigm of the author as an armchair man of leisure.

Still, even early on, Melville reveals himself as an iconoclast and a thinker. He rails against the attempts of missionaries to convert the native islanders. He dares to find the half-naked Polynesian women beautiful. It was under the heady spell of Hawthorne that he wrote the brooding, metaphysical, highly experimental Moby Dick, a transitional work in that its setting, as in the previous half-dozen novels, is a ship at sea. (Interesting to note that his later novels Pierre, Israel Potter and The Confidence Man, and his many poems, almost all of which stray from nautical themes, were critical and popular failures. And what marked his revival? The posthumous 1924 publication of Billy Budd, Sailor). And yet the experimentalism of his later works were way ahead of their time, paving the way for the likes of Joyce, Kafka and O’Neill.

Lastly, Melville ranks I think with certain modern artists like Van Gogh and Orson Welles as being the kind of model who inspires me as an indie theatre artist. Yes, the more he pursued his individual vision, the less “commercial” he became, with the irony that just as he was creating his works of lasting genius, those today most prized by the public, he was scorned by the masses. The world expects you to kiss its ass. How much more satisfying it is to say, like Melville, “World, kiss mine!”

Here’s the always exhaustive O’Malley on the subject of Melville; why the post is practically as long as Moby Dick!: http://www.sheilaomalley.com/?p=56799

And here is John Barrymore in the first cinematic adaptation of Moby Dick, the silent The Sea Beast (1926):

Melville is buried at Woodlawn Cemetery in the Bronx. I made a pilgrimage in 2015: 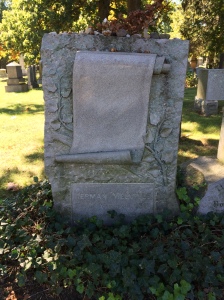