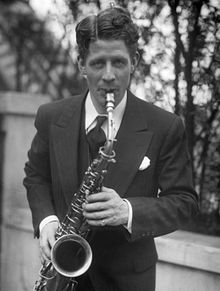 Rudy Vallee is remembered today as a singer, and it is usually forgotten that he was also the leader of his own band. Ben Bernie and Ted Lewis had sung with their bands, too, but Vallee was a real singer, one of the first heart throbs, and he sort of set the mold for the style and scale of stardom that Bing Crosby and Frank Sinatra would later enjoy. He, too, was known for his own catchphrase: “Heigh ho, everybody!”

He was born Hubert Vallee, in Island Pond, Vermont in 1901, although he was to famously grow up in Maine. He loved music from his earliest childhood, singing and taking up the saxophone from a young age. His hero was a musician named Rudy Wiedoeft – from whom he stole his first name. In 1917 Vallee took job at the Star Theatre, in Westbrook, Maine where he swept, tended the furnace, ushered, and projected films. He went on to do similar work at the Strand Theatre in Portland. When there was an emergency opening, Vallee got to play his sax on the stage of the strand – his first professional engagement.

He worked his way through Yale playing in with the Yale Collegians. They started playing vaudeville during the summer. In 1928 they got a regular gig at the Heigh Ho, a new night club. Vallee sang, played the sax and lead the band, with the trademark gimmicks of a megaphone which he sang through cheerleader style, and a college sweater. He also had a very distinctive patter – highly articulate and every bit as literate as one would hope from a Yale educated man. Radio station WABC started to do a live hook-up from the Heigh Ho Club. Vallee’s beautiful voice and unusual patter made him an instant hit, and fan mail started to arrive by the thousands.

He changed the name of the band to the Connecticut Yankees, and they started to make other public appearances. A booking at the R.K.O. theatre at 82nd Street was packed with hundreds of screaming radio fans. He want on to do a tour of the Keith Circuit, including his 1929 debut at the Palace, where he broke the house record for attendance. The movie The Vagabond Lover made him an even bigger star.

In 1929, he started a new radio program, the Fleischman’s Yeast Show. (Imagine naming your show after yeast). In 1930, the group began a long engagement at the 4500 seat Brooklyn Paramount. In the 30s and 40s, he concentrated on films. Some of his notable ones include: International House (1933), The Palm Beach Story (1942), and Mad Wednesday (1947), though there were many more. In 1961, he appeared on Broadway in How to Succeed in Business Without Really Trying. He died in 1986.

To find out more about the history of vaudeville and stars like Rudy Vallee, consult No Applause, Just Throw Money: The Book That Made Vaudeville Famous, available at Amazon, Barnes and Noble, and wherever nutty books are sold.