Mae West in “Belle of the Nineties” 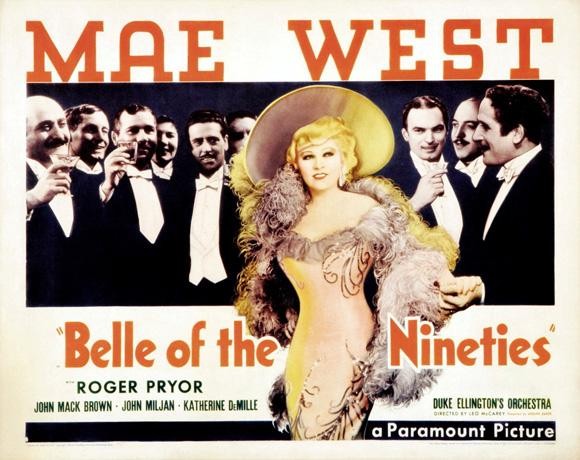 Mae West’s third starring feature Belle of the Nineties, directed be Leo McCarey was released on September 21, 1934. The film is kind of a “might have been”, one that one wishes could be restored to Mae’s original vision. It was originally to have been called It Ain’t No Sin, a perfect title to follow up I’m No Angel and She Done Him Wrong. That’s a way better title.

But by now the censors were in full swing; 1934 was when the Production Code began to be more strictly enforced, and Mae’s first two features had been largely responsible. Paramount changed that title and chopped out most of the best parts of the film. It’s directed by Leo McCarey so we know that the movie had to have been better than it is now. By all reports it had lots more racy stuff, but undoubtedly it was also funnier and made more sense.

Belle of the Nineties was Mae’s biggest budget picture to date. Since the first two were hits she got the go ahead to spend on lavish sets and costumes. There is music by Duke Ellington and lots and lots of songs, probably more than any other Mae West pictures. The picture opens with a TERRIFIC scene at a St. Louis burlesque theatre with chorus girls and comedians. Mae comes out posing in several costumes as a series of “living pictures” tableaux.

Then we get into the plot. She has a romance with a boxer, the Tiger Kid (Roger Pryor). His manager (Johnny Mack Brown) doesn’t like it, thinks it’s a distraction. So he fixes it so the boxer thinks she is playing around. She flees to New Orleans and begins working at a night club. The night club owner Ace Lamont (John Miljan)  takes a shine to her, making his girl friend jealous. Mae rejects the guy, sees another rich admirer who gives her jewels. The nightclub owner hires her old boyfriend the boxer both to fight for him and to steal the jewels. (The boxer doesn’t know they’re on Mae; he robs them in a carriage in the dark). Then there’s a big boxing match scene (which Mae fixes – she fixes ‘em all good). The boxer accidentally kills the nightclub owner as Mae retrieves her jewels. He tells the truth to Mae and she believes him and they burn the nightclub down to hide the murder! And somehow there’s a happy ending of them getting married and getting away with it!