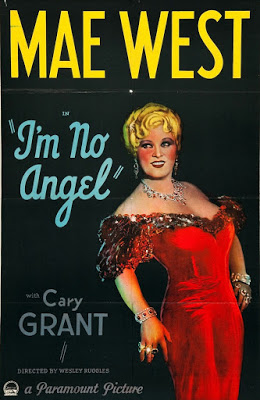 I’m No Angel was the follow up to West’s smash hit She Done Him Wrong, and I’d put both of them on the short list of her best pictures, though nothing is as good as the latter one.

In I’m No Angel, Mae starts out as a cooch dancer in a circus sideshow run by Edward Arnold. She has a man in her life (Ralf Harolde) but she’s tired of him and keeps an apartment in town where she sees other men. While she is dancing with one, her boyfriend “Slick” enters in a jealous rage  and clonks him. They think he is dead and  flee. (It turns out he is just unconscious.)  The boyfriend is sent up the river and Mae is obliged to cut a deal with the circus boss so he’ll pay for her lawyer. 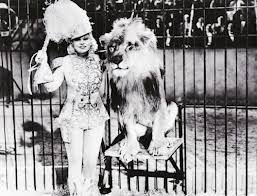 At his insistence she becomes a lady lion tamer (!) and the act proves a success; she becomes a big star. From here she becomes the kept woman of a society guy (Kent Taylor) and then she dumps him when she falls in love with the man’s cousin, played by Cary Grant. Then Slick shows up and pretends he’s back in her life. Cary breaks off the marriage and she sues him for breach of promise. There’s a big trial scene where she conducts her own defense and Cary learns that she truly loves him and they reunite.

As in most of her films (she wrote them all) the plot is episodic, picaresque. Grant isn’t even in the movie until the last third or so. West shoe-horns a zillion of her quips into the script, many of them just gratuitously in there. They’re funny but don’t help move the plot. The only thing that holds it together really is Mae at the center, but that is plenty, believe you me. The film was directed by silent comedy vet Wesley Ruggles. Also in the cast, Gertrude Howard (to whom she utters the immoritral line “Beulah, peel me a grape”), Hattie McDaniel, Edward Arnold, and Gregory Ratoff (who would later direct Mae in The Heat’s On).