As sometimes happens, the bulk of my time working on this Teri Garr (b. 1944) post was spent trying to find just the right photo to head it with. Some are too closely linked to specific roles, some are glamour shots that emphasize her beauty and sexiness at the expense of her droll personality, and many are exploitative recent shots (we’ll return to that). I settled for the one above, which is getting pretty close to what I was hoping for. 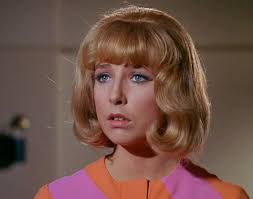 Her gift for comedy was revealed early in the 1967 Star Trek episode “Assignment: Earth”, in which she does about a thousand hilarious double takes. Small acting roles on shows like The Mothers-in-Law and Room 222, led to her getting cast in 1970 as a regular on McCloud as a funny lady police officer. Her sketch comedy skills also got her cast as a regular on The Sonny and Cher Comedy Hour (1972) and the later Cher (1975) and The Sonny and Cher Show (1976) as well as The Ken Berry Wow Show (1972) and The Burns and Shreiber Comedy Hour (1973). And she appeared on sitcoms like M*A*S*H (1973), The Bob Newhart Show (1973), The Odd Couple (1974), and The Girl With Something Extra (1973-74), all of which must have made Mel Brooks aware of her great comedy potential, resulting in her first classic comedy role, Inga in Young Frankenstein (1974). That year, she also had a great part in Francis Ford Coppola’s The Conversation, opposite Gene Hackman.

The peak Teri Garr years were 1977 through 1983. I’d call her the “flavor of the month” but for the fact that she was the flavor of seven years. She typically played the comedically exasperated wife or girlfriend of crackpots. People loved her because she was cute verging on beautiful, funny in a fresh, natural way (which emerged spontaneously on her many talk show appearances) and just plain relatable. For a while there she was constantly on movie screens: opposite John Denver in Oh, God! (1977), Richard Dreyfuss in Close Encounters of the Third Kind (1977), Frederick Forrest in One from the Heart (1981, okay, no one saw that one), Dustin Hoffman in Tootsie (1982), and Michael Keaton in Mr. Mom (1983).

Seeing her in the ensemble in Scorsese’s After Hours (1985) felt like a pivot point. She was still “Teri Garr” but she was in an ensemble that also included Rosanna Arquette and Catherine O’Hara, who seemed much more of the moment. She continued to work constantly for another two decades, but in less high profile stuff. In the early ’90s, the effects of multiple sclerosis set in, and she began to take smaller screen roles and concentrate on voice-overs. Occasionally you saw her in high profile films like Dumb and Dumber (1994), Dick (1999), and Ghost World (2001), but no longer the star. Her appearance changed dramatically over time, first with weight gain then weight loss. After a stroke in 2006, she curtailed her activities considerably. In 2017, photos emerged revealing her steep decline. These are what I was referring to in my opening paragraph. What must it be like for a dancer to lose the use of her muscles! At any rate, this is what I mean by missing her — she is too young to have missed her for this long. I pine for those “It” years of the late ’70s and early ’80s when she seemed like life itself.

To learn more about vaudeville and show biz history, please see No Applause, Just Throw Money: The Book That Made Vaudeville Famous.