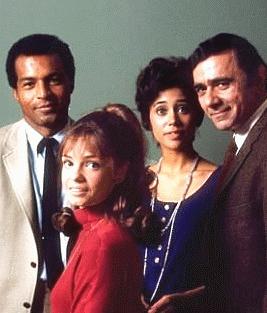 Folks my age or older will protest “NOT forgotten!” (after all, it was a hit show from 1969 through 1974), but younger people are less likely to have heard of this show (I’ve asked around). Room 222 was a kind of groundbreaking attempt to create a series that mixed drama and contemporary “issues” with a sit com format. On the strength of its success, its creator James L. Brooks   was hired to craft the Mary Tyler Moore Show (which was similarly innovative in its putting a single career woman front and center).

Room 222 centered on a very Poitier-esque history teacher (Lloyd Haynes) “just trying to get through to kids” at an L.A. high school. He is generally helped (sometimes hindered) by his girlfriend/ guidance councilor (Denise Nichols), a cynical principal (Michael Constantine) and an over-eager, very white-bread student teacher, a sort of prototype for MTM’s “Mary Richards” (Karen Valentine, who would come to be the series breakout star). The show would come to be a sort of template for everything from The White Shadow to Welcome Back, Kotter to Fame.

Not having seen it since about the fourth grade I looked at a few last night, and it is a VERY embryonic version of the stuff that would follow in its footsteps, taking on very serious subjects, but then adding a very cheesy laughtrack at hugely inappropriate, racially-charged moments, as though the producers were afraid of repercussions. (Example: a tough urban black student frightens a mousy bespeckled white teacher. Followed by a laugh-track worthy of The Brady Bunch.) The effect is disorienting and downright nightmarish to say the least.

Here’s the credit sequence from the last season: