The Brilliance of Bob Newhart

Laurels today for Bob Newhart (b. 1929). My period of maximum appreciation for Newhart’s work is the slice right down the middle, that coincides with his first sit-com The Bob Newhart Show (1972-1978), and I guess I’ll never know if that’s because that’s the section I grew up with or if it’s genuinely his best period. (I suspect the latter, however).

Newhart came to prominence with a stand-up act and a series of extremely successful comedy records in the 1960s. He had a number of routines he performed on the telephone, with the audience only hearing his end of the conversation.

These bits are funny (after all, he’s Bob Newhart) but the media in its usual ignorance has always overpraised their uniqueness. Telephone shtick is a very COMMON comedy device. Shelly Berman always contended Newhart stole the routine from him, but I happen to know that it even predates Berman  — by decades. Georgie Jessel had a routine just like it in vaudeville as a teenager, a half century before. (And thanks, Jonathan Smith, for reminding me that the old bit “Cohen on the Telephone” goes back to 1906.) 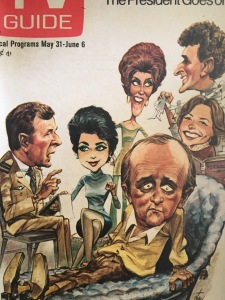 At any rate, the first Bob Newhart show (produced by Mary Tyler Moore’s company MTM and co-created by Lorenzo Music), is as far as I’m concerned a work of perfection. I am never anything but enveloped in pleasure when I watch any episode of that show, from its alternately punchy and melancholy theme music (also written by Music with his wife Henrietta)…to the interplay between the low-key, deadpan, unflappable Newhart and the nutty cast of character actors (Bill Daily, Peter Bonerz, Marcia Wallace, plus the insane ones, Jack Riley, John Fiedler, Florida Friebus, et al)….plus the blood pressure raising hotness of Newhart’s television wife Suzanne Pleshette (by now it’s a sit-com axiom that schmucky comedian types always have impossibly hot wives).

The premise (that he was a psychologist) was a chance for Newhart to expand the straight-man business he did on the telephone into a universe where everyone else was a joke-puller. His comic timing proved to be the best since Jack Benny’s and remains the gold standard among contemporary comedians. (When Ellen DeGeneres got her first sit-com Ellen 1994-1998, I used to think  of her delivery — in a good way — as Newhartesque”).

I must admit Newhart’s second show Newhart (1982-1990) never did as much for me as it seemed to do for everybody else. I felt (much like Harry Anderson’s Night Court) , it stretched too much for absurdity in a way that doesn’t suit the sit-com format. A good sit-com naturally needs to exaggerate for the sake of comedy (that’s the whole point) but to me it feels kind of “off” when characters and situations are self-consciously surreal (at any rate, if they’re such without any serious wit behind them.  I was never impressed by the writing on Newhart.) On his original show, Newhart’s laughs came mostly from the acting, not from inorganic (and fairly soggy) attempts at cleverness, as on the later show. On the other hand, the proceedings were enlivened by a funny cast that included Tom Poston, William Sanderson, and Peter Scolari. And of course, the legendary final episode is one of the most ingenious of all time.