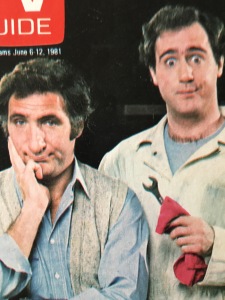 Having already did a thinky tribute to the great Andy Kaufman, we hang today’s Taxi post on the show’s actual star Judd Hirsch, whose birthday it is.

It’s rare to meet someone who doesn’t consider Taxi (1978-83) one of the greatest sitcoms of all time, due to terrific writing and direction, but particularly an amazing ensemble cast, many of whom went on to greater stardom. Hirsch had previously starred in the cop show Delvecchio (1976-77). On Taxi he played a philosophical New York cab driver named Alex Reiger, a guy smart enough to have been a doctor, a lawyer, anything — but has resigned himself to the lot of hacking a cab. On the show he is a sort of Andy Taylor to the zanies around him, the guy who usually has his feet on the ground, while his friends are constantly going awry and losing perspective. His fellow cabbies are mostly people working towards something else in life: Bobby Wheeler (Jeff Conaway) aspires to be an actor; Elaine Nardo (Marilu Henner) works at an art gallery and wants to have one of her own some day; Tony Banta (Tony Danza) is trying to make the grade as a boxer. Christopher Lloyd joined the cast as Reverend Jim, a drug-addled guru in the second season, replacing Randall Carver, who played John Burns, an all-American college student who was studying forestry. On the fringes was Kaufman doing his “Foreign Man” character as Latka Gravas, the cab company’s mechanic. Carol Kane later joined the cast as his wife Simka.

The other major star of the show (forming a sort of triumvirate with Hirsch and Kaufman in initial popularity) was Danny Devito as Louie DePalma, the Sunshine Cab Company’s nasty dispatcher, everyone’s boss, a kind of feral, demented Ebeneezer Scrooge who loved to crap on everybody’s dreams. Of the dreamers, Conaway’s actor Bobby was foremost and made for some of the most poignant and pointed plots. He kept ALMOST making it, crowed about his triumph, and then falling back down to earth for Louie to ridicule. The fact that Conaway was good looking, with an absurdly luxurious head of hair to rival John Davidson’s, and Louie was about five feet tall, bald and dumpy, intensified the contrast and fueled the animosity.

The show played like great comic theatre. I especially loved the set. Most of the show took place in the Sunshine Cab Company’s garage in the changeover between shifts. Taxi was one of the many TV shows that made me want to move to New York. That sad, jazzy theme song with the cab going over the Brooklyn bridge with the Manhattan skyline in the background steals my heart every time. My first trip to NYC was in 1979 — right after that bit was shot. My Big Apple patriotism begins right there.