The Several Selves of Sally Field 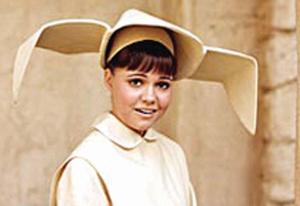 Those of a certain age will recognize in the title a sly reference to the 1976 TV movie Sybil, a shift in direction in the career of Sally Field (b. 1946) of which there have been many. We don’t typically write about contemporary stars here, but Field has been one now for over 50 years, and we DO write about television shows that are that old, and that is the impetus for today’s post. That, and I learned some interesting information about her mother, who definitely WAS in old school show biz!

Fields’ mother was the actress and performer Maggie Mahoney (a.k.a. Margaret Field or Margaret Morlan, 1922-2011). Houston-born Maggie (whose birth surname was Morlan) was discovered while acting at the Pasadena Playhouse. She broke into films around the time Sally was born, alternating larger roles in musical film shorts for Paramount with bit parts in features. Some well known early movies she made brief appearances in include Blue Skies (1946), The Perils of Pauline (1947), The Paleface (1948), My Friend Irma (1949), Samson and Delilah (1950) and Riding High (1950). In 1950 her marriage to career army man Richard Field broke up, and at the same time, her roles in films began to briefly get better. Most of them were either westerns or science fiction movies. They include: The Man from Planet X (1951), The Dakota Kid (1951), Yukon Manhunt (1951), Captive Women (1952) and The Story of Will Rogers (1952). The last of this period was So This Is Love (1953), a biopic about Grace Moore. In 1952 she married stuntman Jock Mahoney, taking his name professionally (it had been Field prior to this). For the next two decades she was primarily a television actress; her last credit was a 1973 television movie called The Stranger. Thus, her career overlapped that of Sally’s for a good eight years.

Those of a certain age (older than me, thank you very much), first knew Sally Field as the title character in the TV sitcom adaptation of the popular film series and the 1957 novel on which the films were based. The nickname is a contraction of “Girl Midget”, a teasing handle bestowed upon Southern California teenager Frances Laurence, who is at once a bit of a tom boy and totally boy crazy — and above all a sun and surf enthusiast. In the three films (1959-63), the part had been played by Sandra Dee, Deborah Walley, and Cindy Carol. Field was 19 years old when she got the starring role in the TV version, and it was the launch of her career, despite only lasting a single season. Don Porter played her dad, an affection, indulgent UCLA professor. I never knew about this show until Nick at Night revived it in the ’80s, and I much enjoyed it, especially it’s swinging theme song by Johnny Tillotson (who’s also in one of my favorite movies The Fat Spy), and guest appearances by the likes of Martin Milner and future stars like Daniel J. Travanti and Richard Dreyfus, all playing Gidget’s screwy boyfriends. The thing about Sally Field as Gidget…that round baby face, and perky voice: those qualities never left her. I feel like she hasn’t changed a bit in over 50 years. 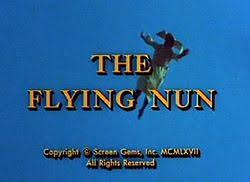 THIS bit of insanity was my introduction to Sally Field. It was a sort of combination of the ’60s nun chic genre in such films as The Sound of Music (1965), The Singing Nun (1966), The Trouble with Angels (1966), Where Angels Go Trouble Follows (1968) and Change of Habit (1969) on the one hand…and “magical” sitcoms and movies of the same period, ranging from Mary Poppins and Nanny and the Professor to Bewitched, I Dream of Jeannie, My Favorite Martian, etc etc etc. The premise here is that Field is a nun who is so tiny and light, and wearing a habit so starched, that high winds send her aloft like a kite so that she can fly around and solve problems! I was a very young child at the time, so it all made perfect sense to me, and I really loved the show. Who doesn’t want to fly? I dream of doing it all the time, and dreamed about it even more as a kid. The other cool aspect of the show? Is that it is very matter-of-factly set at a convent in PUERTO RICO. Has a major American tv show ever been set there since? If there had been, maybe more American half-wits would know that it was part of America. Alejandro Rey played Carlos, the closest thing to Sister Bertrille’s love interest, a dashing casino owner who’d been raised at the convent, and still helps the sisters out whenever her can. And the show was also my first introduction to the great Vito Scotti, who played a bungling police captain. Also memorable were Madeline Sherwood as the Mother Superior and Marge Redmond as Sister Jacqueline, the narrator and Sister Bertille’s older friend.

Ironically, it is the last of Field’s three sitcoms that has fallen entirely off the map! While the title may sound like something out of the adult classifieds, it refers to ESP. Field’s character has it, and her husband, played by John Davidson, has to deal with it! The show only lasted one season despite a great cast, including Teri Garr, Henry Jones, William Windom, and Zohra Lampert, and Bernard Slade at the helm, the guy behind The Flying Nun, and such later hits as the Broadway and movie smash Same Time, Next year.

After this show’s cancellation, she resolved to change her image and get serious. But not, it turns out, TOO serious. She had already dabbled a little in this. She had played a trouble hippie runaway, for example, in the made for TV movie with Maybe I’ll Come Home in the Spring (1971). In 1974 she began studying with Lee Strasberg at the Actor’s Studio (as one does) in hopes that she would begin to land serious roles. She won an Emmy in 1976 for playing the title character in Sybil, a woman with multiple personality disorder, and then got Oscars for Norma Rae (1976) and Places in the Heart (1984), and the multiple Oscar nominated Absence of Malice (1981) and then got another Emmy for recurring role on ER (on which she appeared 2000-2006). That said, most of her work, as high profile and successful as it’s been (including some of the vehicles I just named), has been either light or trivial or just dumb in that horrible middlebrow way Hollywood has, never more so than when it thinks it’s being serious or “important”. In the mid 1970s, she was involved with Burt Reynolds and co-starred in several films with him, including Smokey and the Bandit (1977), The End (1978), Hooper (1978) and Smokey and the Bandit II (1980). Then there was Heroes (1977) with Henry Winkler; Irwin Allen’s Beyond the Poseidon Adventure (1979); Murphy’s Romance (1985), Punchline (1988), Steel Magnolias (1989), Soapdish (1991), Mrs. Doubtfire (1993), Forrest Gump (1994), and Where the Heart Is (2000). More recently she was Aunt May in the 2012 Spiderman reboot, and Mary Todd Lincoln in Spielberg’s 2012 Lincoln …a bit of genius casting I thought, both in terms of body type (diminutive, dark haired woman) and resonance, given her past playing mentally disturbed women in Sybil and on ER. And she was in the original 2002 Broadway production of Edward Albee’s The Goat, or Who is Sylvia?