Jack Elam and “The Texas Wheelers” 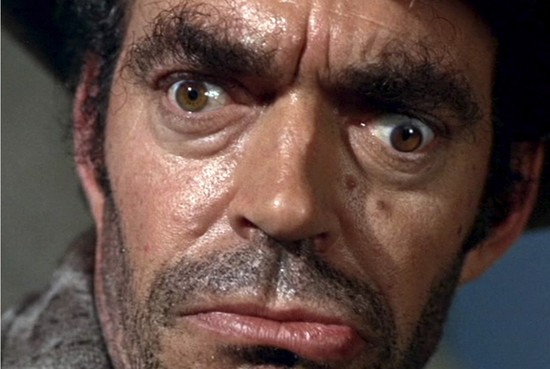 Much like Ben Turpin or Marty Feldman, Jack Elam (William Scott Elam, 1920-2003) dined out for decades on a wayward eye. Unlike t’others, Elam employed his in the service of MENACE a good long while before turning (one eye at a time) to comedy. The dead, staring peeper was apparently the result of a boyhood scuffle with some little punk who jabbed a pencil in there. I’d wish that little psycho an eternity in hell for a crime like that but for the fact that Elam benefitted from a lucrative revenge that spooled out over 50 years.

Elam began his working life as an accountant, bookkeeper and auditor in Los Angeles. But you can’t look that distinctive in the movie capital of the world without eventually getting summoned before the cameras and that is what happened to Elam. While eventually known almost entirely for westerns, in the early years Elam was also cast in noir and exploitation movies, like She Shoulda Said No (1949), Quicksand (1950), The Ring (1952), Kansas City Confidential (1952), Kiss Me Deadly (1955) and Baby Face Nelson (1957). In both these types of movies as well as westerns he was invariably cast as a henchman. He was like a special effect. The hero would be trapped and thugs would be sent in to work him over and one of them would be Elam. And the hero (and the audience) would get an eyeful of that eye and know that this was going to get ugly in more ways than one. Whether the thug was born with that eye or he got it in a scrap, it’s a certainty that he would be mean.

His comedy potential was spotted early by Dean Martin and Jerry Lewis, who had him in their films Artists and Models (1955) and Pardners (1956). In 1960 Nat Hiken put him in The Slowest Gun in the West alongside Phil Silvers and Jack Benny. Towards the end of the ’60s, the floodgates opened up — they seemed to be making movies just for his peculiar talent: Support Your Local Sheriff (1969), The Over the Hill Gang (1969), Cockeyed Cowboys of Calico County (1970), Dirty Dingus Magee (1970),  Support Your Local Gunfighter (1971), The Apple Dumpling Gang Rides Again (1979), The Villain (1979), the Cannonball Run movies, etc. 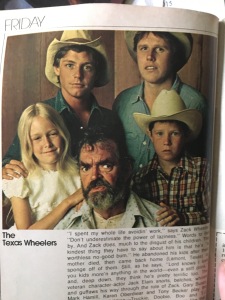 In 1974, Elam got his own sitcom! And it was a doozy! I remember it well, despite the fact that it was cancelled after only a handful of episode aired. Produced by MTM at the height of their success, it starred Elam as a dad who returns to raise his family after their mother died. The show is now best remembered for having a fairly legendary cast. A pre-Buddy Holly Story Gary Bussey was eldest son Truckie Wheeler; a pre-Star Wars  Mark Hamill was Doobie Wheeler; Tony Becker (best known for the series Tour of Duty) was T.J. Wheeler. John Prine did the theme song! And the whole gag of the show was that, all of the sudden their father was…Jack Elam, haha! A grizzled, rough old cowboy. So. Only four episodes aired during its first season. Then, in 1975 they tried again and aired another four episodes. But they could not get people to watch, a fact which has blamed on the fact that it was up against The Rockford Files in the schedule. Anyway there are clips of it up on Youtube. It’s pretty great.

Elam continued to work steadily for another two decades after The Texas Wheelers went off the air. He actually starred in an additional two other tv series. Struck By Lightning (1979) was a sitcom in which he played Frankenstein’s Monster! And Easy Street (1986-87) was a sort of latter day reworking of the The Beverly Hillbillies, with Loni Anderson and James Cromwell also in the cast. His last credit was on the tv series version of Lonesome Dove (1994-95).