Marty Feldman: One Eye on Posterity 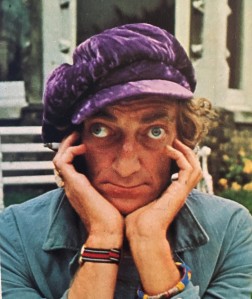 A tribute to today international comedy sensation Marty Feldman (1934-1982). A Cockney Jew with a broken nose and bulging, staring eyes, one of which was wildly out of alignment, it’s no mystery that he was successful in comedy, or even that he was able to conquer the U.S. and other countries in addition to the U.K. But think about it. There are plenty of strange looking dudes who don’t go into comedy, or succeed at it. What’s often overlooked is that he was a comedy auteur, a dynamo as a comedy writer; that was a major part of his work throughout his career.

Feldman entered show business as a teenage trumpet player who played local fairs, but quickly decided he would never excel at music. He broke into British television as a writer. He contributed to both the radio and tv versions of Educating Archie, which starred ventriloquist Peter Brough and his eponymous dummy. With writing partner Barry Took he wrote episodes for the sitcoms The Army Game (1960), Bootsie and Snudge (1962), and Round the Home (1964-67). From 1966 through 1967 he was the head writer for The Frost Report.

1967 was when Feldman finally broke out as a performer, co-starring with future Monty Python members John Cleese and Graham Chapman, and fourth member Tim Brooke-Taylor, on At Last the 1948 Show. This led to his first starring BBC series Marty in 1969, which was renamed It’s Marty for its second season. This high visibility gig gave him the opportunity to be cast as a regular on The Dean Martin Show and Dean Martin Presents the Golddiggers (1970). And, then his first U.S. comedy-variety series The Marty Feldman Comedy Machine (1971-72). (The photo above is from the TV Guide feature about the new series). The Machine ran a year (although it returned briefly in 1974), but that’s okay, he was on to bigger things. 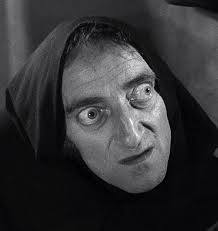 Following a turn as Banjo in the all-star 1972 tv movie of The Man Who Came to Dinner, Mel Brooks and Gene Wilder cast him as the hunchbacked lab assistant Igor in Young Frankenstein (1974), undoubtedly his best-loved and best-remembered role. Wilder then cast him in Sherlock Holmes’ Smarter Brother (1975) and Brooks put him in Silent Movie (1976). By now he was an avowed American comedy star, with the juice to create his own vehicles. After directing an episode of When Things Were Rotten (1975), he wrote, directed and starred in The Last Remake of Beau Geste (1977) and In God We Tru$t (1980). These were not received as well by critics or the public, nor were the last two comedies he appeared in as an actor Slapstick of Another Kind (1982), or Graham Chapman’s Yellowbeard (1983).

Sadly, during the filming of the latter film in Mexico he contracted a case of shellfish poisoning which triggered a lethal heart attack. He was only 48, ending a productive and still promising career. Comedy has had too few real auteurs; Marty Feldman’s early death was a great loss. I, for one, would like to have seen him as Fagin.