Just got word that David Frost passed away on Saturday at age 74, felled by a heart attack while on a cruise ship. Frost was someone I admired a lot — part comedian, part journalist, and equally intimidating at both, it seems to me. Some caviled at the blurring of the line between entertainment and news, but it always seemed to me that as long as the personality in question brings intelligence to the table and and fulfills journalistic standards, treating heavy topics with the seriousness they deserve, of COURSE it’s alright. We’re human beings, not robots.

What may have confused people at first was that his first show That Was the Week That Was (which ran in the UK from the 1962 and 1963, and in the US from 1964 through 1965) was a fake comedy news program, a definite precursor to what Jon Stewart and Stephen Colbert do now. (Frost had been a member of the Footlights Drama Society with Peter Cook at Cambridge, and then became a cabaret performer in London).  Around 1968, he started doing hard interviews of political figures, both in the UK and the US. The way I know him, of course was that he was a familiar presence on American television from the 60s through 1980, creating interview programs that occupied an interesting niche. He was more serious than the average talk show host by far (Johnny Carson, Mike Douglas, Merv Griffin), and even more serious than Dick Cavett (and about as funny), but somehow he was ALSO more serious than many purported straight journalists, like Hugh Downs, and Barbara Walters. Plus, he could be funny. I’ve always thought of him as someone to be emulated. He just kind of did it right. Since 1980 though for Americans his career has mostly been just a memory, although he continued to be a constant presence on British television. 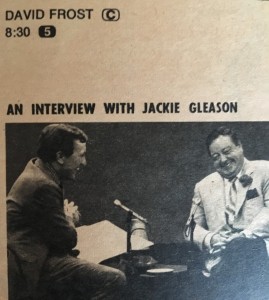