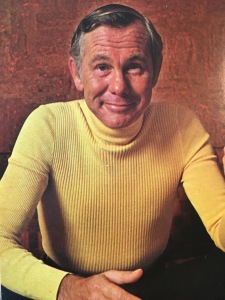 May 22, 1992 was the night of my bachelor party. It also happened to be the night of Johnny Carson’s last appearance on The Tonight Show. The television was on in the bar adjacent the social hall where the party was being held. Before the night was over, my guests were all watching television. (If the bachelor party had featured naked women,  as it did not, the story undoubtedly would have been different. Even Johnny would have understood that.)

It’s hard to explain to young people the significance that Carson once seemed to have. But like King Lear, his legacy has been divided up. Neither Leno nor Letterman filled his shoes (I’d cast my vote for Letterman, but the public doesn’t seem to), and nowadays there’s also Fallon, Colbert, Conan, Kimmel and a bunch of others. But once upon a time, The Tonight Show was the only game in town and Carson ruled it. 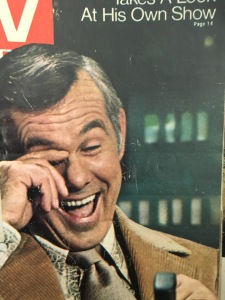 Born this day in 1925, the Iowa native began performing magic as a teenager as The Great Carsoni. After serving in WWII, he enrolled at University of Nebraska, where he continued his magic career and got a degree in radio and speech. His first tv show was a local morning program out of Omaha. From 1951-53 he hosted a local comedy show out of Los Angeles called Carson’s Cellar that became a cult favorite. Based on its success, Red Skelton hired him to be a writer. An emergency in 1954 necessitated Johnny filling in for Red – -and Johnny pulled it off. From there, Johnny went on to appear in a variety of national comedy, talk and games shows, before taking the reins of Tonight from Jack Paar in 1962.

In the early 70s, Carson produced a series of specials he called the Sun City Scandals featuring old time show biz stars who were in the twilight of their careers. It ended up being the last gig for many old time vaudevillians!

Carson himself rode off into the sunset in 2005.

Here’s a historic bit of baton passing: Jack Benny and the young Carson on the former’s show in 1955:

To find out more about  the history of variety entertainment, including tv variety, consult No Applause, Just Throw Money: The Book That Made Vaudeville Famous, available at Amazon, Barnes and Noble, and wherever nutty books are sold.