James Arness and The Legend of “Gunsmoke” 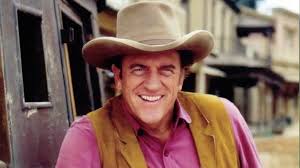 A World War Two vet with some radio experience in his native Minneapolis (and the brother of fellow actor Peter Graves), Arness came to Hollywood in the 1940s where his good voice, likable personality and above all his remarkable physique were the determining factors in his casting (at 6’7″ he was taller than even Fess Parker and Clint Walker…guys who who already towered over James Garner and John Wayne, who were guys who towered over everybody else). Of Norwegian stock (his name as originally spelled Aurness), he was very sensibly cast as Loretta Young’s kid brother in The Farmer’s Daughter (1947). His size came in good stead when he was cast as the creature in the sci fi classic The Thing from Another World (1951); his role is much more conventional in his other outing in that genre, Them! Most of Arness’s film roles were in westerns and war pictures. A good many of these had starred John Wayne, and over the years they became good pals. It was Wayne who suggested Arness for the lead role of Marshall Matt Dillon in Gunsmoke. 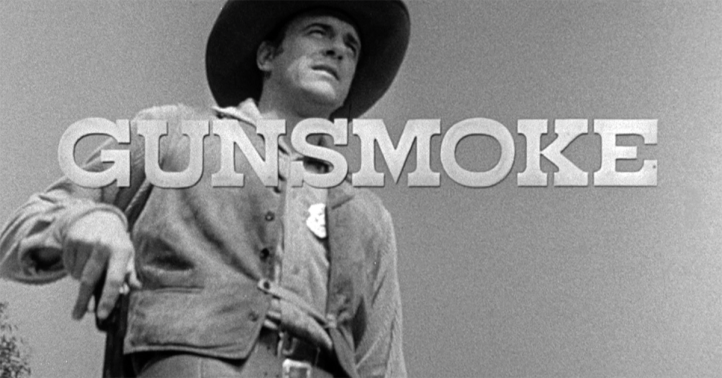 Gunsmoke was not just a going concern when I was a kid; it was a national institution. At the time it was cancelled in 1975, it was not only the last western tv series left (unthinkable 10 or 20 years earlier when the genre dominated the medium) but held the record for the longest running prime-time live action series (as opposed to say a news program or talk show), a record it held until quite recently. Along with Bonanza, The High Chaparral and The Cisco Kid, it was my introduction to the genre, and much more than those other shows, established the conventions of the iconic western characters, the stoic lawman (Arness as Dillon), the dance hall girl (Amanda Blake as Miss Kitty), the comic sidekick (Ken Curtis as Festus during the years I watched), and the crusty wise old doctor (Milburn Stone as “Doc”). Set in Dodge City, it is clearly inspired by popular tellings of the Gunfight at the OK Corral, with Matt Dillon a hero in the mold of how we usually think of Wyatt Earp, steady, stolid and stoic — everything that begins with “st”.

L.A. Times tv critic Cecil Smith called the show “Our own Iliad and Odyssey“. The claim may be grandiose as to its content, but it’s certainly true that the program’s development and evolution were epic. It started out on radio in 1952 with William Conrad as Matt Dillon. Many older folks (like my dad) always associated that actor with this role, which he played until the radio version went off the air in 1961. Though Conrad had an incredible voice and had done terrific work establishing the character, the sad fact was that he was obese, which was thought wrong for the character when it went to television in 1955. Both the radio and television versions of the show were excoriated for their violence in their day — gun violence is baked right into the title of the show. This will be missed by contemporary audiences, who are used to much greater levels of mayhem in their entertainment.

The tv version had some other notable actors in the cast during its earlier years: Dennis Weaver played Matt’s first sidekick, the gimp Chester, from the show’s inception through 1964. Burt Reynolds played “halfbreed” deputy Quint Asper from 1962 through 1965. (A couple of Reynolds’ early films traded on this association, casting him in similar roles). 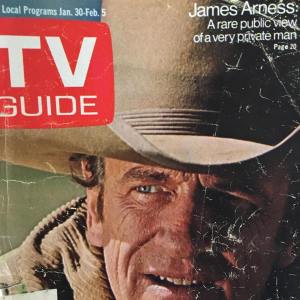 The show was still popular when it was cancelled in 1975, a late-ish victim of the so-called “rural purge” we wrote about here and here. Fortunately, it returned in a series of five tv movies from 1987 through 1994, making the true Gunsmoke saga one of four decades as opposed to two. After the cancellation, Arness starred in another western series How the West Was Won (1976-1979), and the cop show McClain’s Law (1981-82). But to millions of fans, he was always Matt Dillon.

Hey western fans! It also the birthday of John Wayne and Jay Silverheels. Click the links for posts about them.