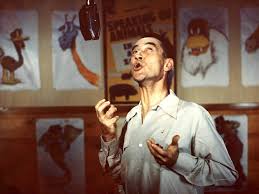 What an amazing person for most of us not to have known the name of! Pinto Colvig (Vance Debar Colvig Sr, 1892-1967) was the original voice of Walt Disney’s Goofy and Pluto, the original Bozo the Clown, a cartoonist, animator, voice-over artist, comedy musician in vaudeville, silent film comedian, and big top clown.

The son of an Oregon pioneer, Pinto (so nicknamed because of his freckles) worked up funny routines with a clarinet for informal gatherings, and got his first professional clown work at age 12 at Portland’s Lewis and Clark Centennial Exposition (i.e., world’s fair) in 1905. His original act was to play squeaky, out of tune music on the clarinet, making funny faces while he hit the bum notes. Colvig was also a skilled visual artist. While attending college, he drew cartoons for the school paper, and played clarinet in the marching band, and between semester he worked in circuses and vaudeville. He worked up a “chalk talk” routine, an established vaudeville specialty where the performer drew cartoons on the spot, accompanied by humorous patter. This got him bookings on the Pantages circuit in 1913 and he finally dropped school. (He’d been attending Oregon Agricultural College, which is now Oregon State). In 1914 he got jobs drawing cartoons at papers in Reno and Carson City, but quit them the following year to join with the Al G. Barnes Circus, where he clowned and played in the band.

In 1916, Pinto married and settled down in San Francisco, drawing cartoons for local papers, and experimenting with animation in the evenings. In 1922 he moved to Hollywood, where he worked for Mack Sennett and other studios animating gag sequences, writing gags, writing and designing title cards, and occasionally acting (he appeared in about a half dozen silent comedy shorts, including three Buster Brown films). By the end of the decade he’d gotten seriously focused on the animation field, and was collaborating with Walter Lanz on various projects. Starting in 1929 he became part of Lanz’s staff creating Oswald the Lucky Rabbit cartoons. In 1931 he began a long association with Walt Disney as a writer and voice-over artist. He did the voices of Pluto and Goofy, he played one of the Three Little Pigs, and Sleepy and Grumpy in Snow White and the Seven Dwarfs. In 1937 he had a falling out with Disney, and jumped ship over to Fleischer Studios, where he played Gabby the Town Crier in Gulliver’s Travels (1939) and provided the voice of Bluto in Popeye cartoons. During this period, he also voiced one of the Munchkins in The Wizard of Oz! In 1940, he resumed his duties at Disney. In addition to Pluto and Goofy, he also voiced characters in The Adventures of Ichabod and Mr. Toad (1949), Alice in Wonderland (1951), and Sleeping Beauty (1959). During this period he also worked in radio, on shows like The Jack Benny Show and Amos ‘n’ Andy.

In 1946 he got a unique opportunity when asked to play a new character, Bozo the Clown, on a children’s record. Colvig owned the part of Bozo on records and on television for over a decade. In 1956 the role ceased to be Colvig’s exclusively when the rights were purchased and Bozo’s Big Top became a franchise, with many local performers taking the part, among them Pinto’s son Vance Colvig Jr, and Willard Scott, later famous as the NBC Today Show weather man. Krusty the Clown on The Simpsons seems very much based on Bozo. His presence on the show must seem a little strange to younger people. There really hasn’t been a similar children’s clown on local television for decades.

Colvig’s last film work was in the 1965 animated short Donald Duck Goes West. His last voice-over job was a stint as Goofy for the Telephone Pavilion at Expo 67 in Montreal. Thus Pino Colvig managed to both begin and end his career at world’s fairs, with a 62 year career in between.

To learn more about vaudeville, please see No Applause, Just Throw Money: The Book That Made Vaudeville Famous, and for more on classic film comedy, please read Chain of Fools: Silent Comedy and Its Legacies from Nickelodeons to Youtube.