My First Show Ever! (And the Saga of Buster Brown) 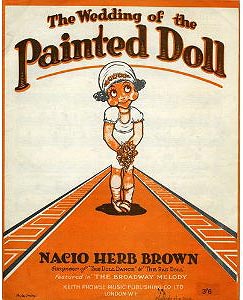 In 1970 our first grade put on a sort of pageant to the accompaniment of a song called “The Wedding of the Painted Doll”. Before investigating, I used to assume that this number had been lifted from some turn of the century Broadway operetta. As a concept, it doesn’t sound too different from, say, Babes in Toyland. But nope!  It turns out that the song, cowritten by Arthur Freed and Nacio Herb Brown, is from MGM’s first all-talking film, the musical The Broadway Melody (1929).

There’s no clip of the original number on Youtube, but you can watch it on TCM’s web page: http://www.tcm.com/mediaroom/video/296189/Broadway-Melody-The-Movie-Clip-Painted-Doll.html

The same year the singer Charles King also made this 78, although this version is without the charming dance number for a visual.

Why anyone dreamt of staging this song (which was 41 years old at the time) with a bunch of five and six year olds, is a mystery to me, however a little research reveals this was a very popular song: not only are there many recorded versions from back in the day, but it also seems to be a selection that is STILL trotted out for performance by musicians, singers and even school groups. Indeed, I was very fortunate to have one of my favorite performers Poor Baby Bree sing it at my wedding, with Franklin Bruno on piano!

What was MY role in the presentation, you haven’t asked yet?

I played Buster Brown (referred to in the lyrics). My job was to hold hands with Little Red Riding Hood and skip from the back of the house (the school’s so-called “multi-purpose room”) to the stage, where we proceeded to stand and fidget with a bunch of other children until the end of the number. 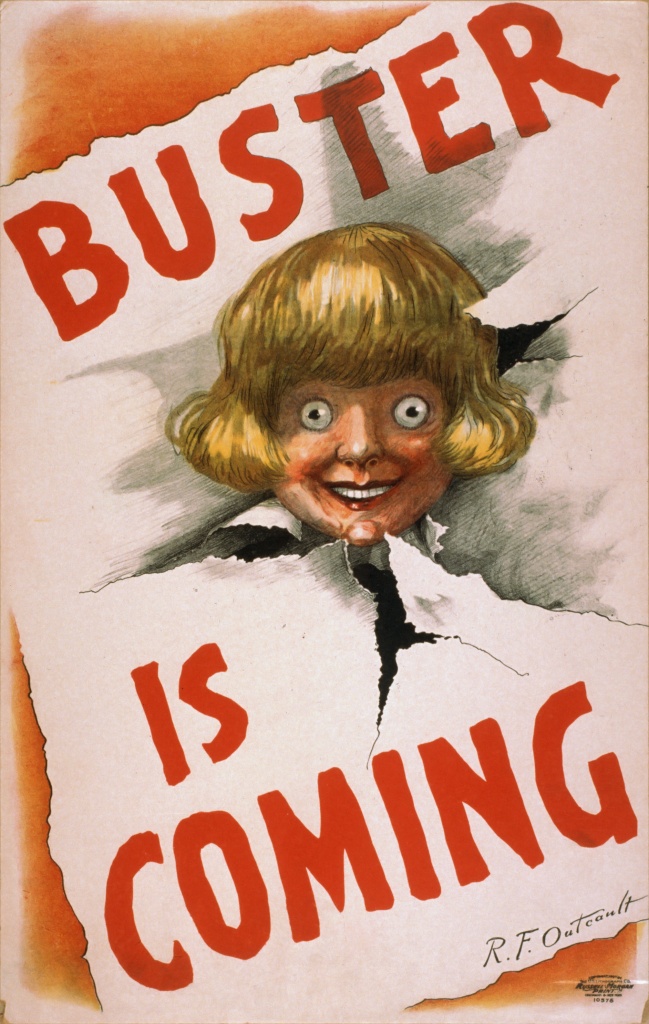 With typical actor’s myopia, I will now proceed to extrapolate how the most fascinating part of the entire proceedings was my own character. Indeed, the history of Buster Brown is just as intriguing, if not more so, than the production which surrounds him, which is, it must be admitted, so much window dressing.

Inspired in part by Buster Keaton (then still a child performer in vaudeville), Buster Brown was a comic strip character launched in 1902 by cartoonist Richard Felton Outcault (creator of The Yellow Kid, which we also wrote about here.). Buster Brown was a mischievous little boy in an exceedingly sissified page boy outfit that must have inspired both George Minifer and Richie Rich. His pal was a dog named Tige. 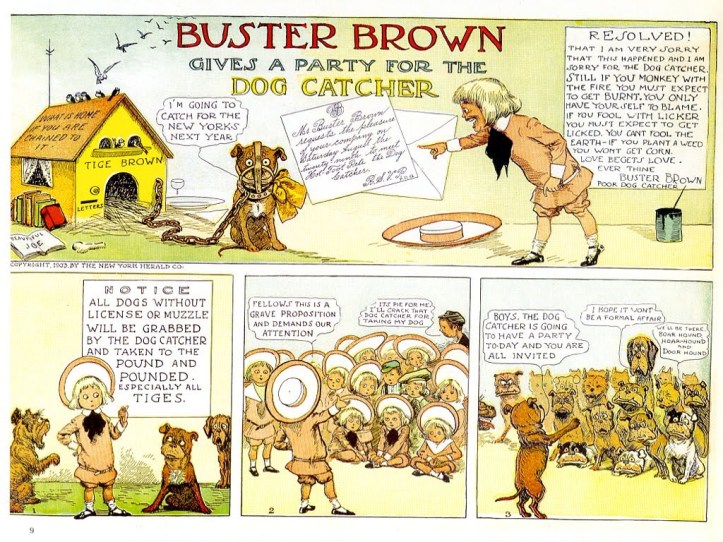 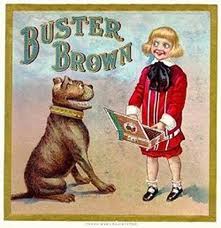 The character was so popular that two years later it became the logo and mascot for the Brown Shoe Company (whose wares were often called afterwards “Buster Browns”.  I myself had a pair of these once).

Now it gets really good. From 1904 through 1930 little people (among them, Edmond Ansley) were hired by the Brown Shoe Company to make personal appearances at department stores dressed as Buster Brown and Tige: 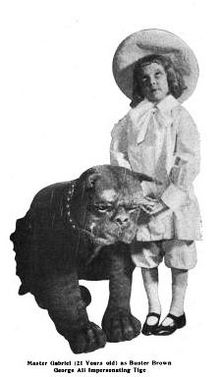 In 1905, there was a Buster Brown Broadway musical starring a a 21 year old dwarf named Master Gabriel:

By 1921, Buster was finished as a strip, but the character kept going and not just in the form of these personal appearances. For example, from 1925 through 1929 Universal released a series of two-reel silent movie shorts starring the character (portrayed by Arthur Trimble). One of the dogs who played Tige went on to play Pete the Pup in the Our Gang shorts. 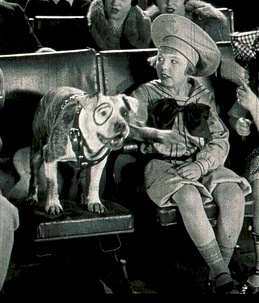 From 1943 through 1952, Buster Brown had his very own radio show hosted by one Smilin’ Ed. You can hear a great many of the episodes here: http://www.myoldradio.com/old-radio-shows/buster-brown/1.

In 1950, the television version was launched. After Smilin’ Ed died in 1954, Andy Devine took the show over until it went off the air in 1960 under the title Andy’s Gang.

By the time our little show came along, this program had been off the air for ten years, but I still knew Buster Brown through the shoes and the logo: 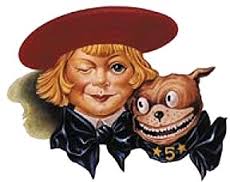 The moral of the story? We are, always have been, and always will be, puppets for The Man.

Anyway that was my first show. It begins to dawn me on why this kind of stuff is so much a part of my life. Because it always HAS been! (I don’t know if there are any photos of our little first grade presentation, by the way. I’ve never seen any).