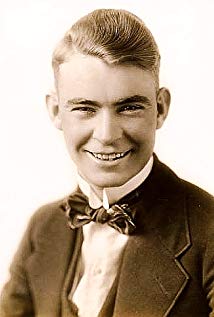 F. Richard Jones (1893-1930) was a director of great silent comedy classics and was positioned to be one of the top directors of talking pictures for a good many years if tuberculosis hadn’t taken him away at the young age of 37.

Jones got into the business as a film lab technician in his native St. Louis. He was in his early 20s when he went to work for Mack Sennett in Hollywood, where he proved so astute that he was rapidly allowed to direct shorts. His first film was Ambrose’s First Falsehood (1914) with Mack Swain. He went on to direct numerous short comedies starring Syd Chaplin, Polly Moran, Charles Murray, Louise Fazenda, Slim Summerville, Chester Conklin, Harry Langdon, et al. His next breakthrough came when he was allowed to co-direct Mabel Normand’s first feature, Mickey (1918), which became a smash hit. The relationship was so fortuitous he was entrusted with the direction of her later features Molly O (1921), Suzanna (1923) and The Extra Girl (1923). For Sennett he directed the World War One comedy Yankee Doodle in Berlin (1919), and The Shriek of Araby (1923) starring Ben Turpin.  He also directed Dorothy Gish in the comedy features in Flying Pat (1920), The Ghost in the Garret (1921), and The Country Flapper (1922).

In 1925 Jones began a supervisory post at Hal Roach studios, overseeing the creations of dozens of comedies starring Stan Laurel, Charley Chase, James Finlayson, et al, occasionally still in the director’s chair. In 1927 he directed Douglas Fairbanks in The Gaucho, and this paved the way for him to be an “A” list, straight director going forward. His last film, the sound mystery feature Bulldog Drummond (1929) indicates the direction he might have gone as the ’30s rolled on. But as we wrote in our opening, it wasn’t to be.

For more on early silent and slapstick film comedy, please read Chain of Fools: Silent Comedy and Its Legacies from Nickelodeons to Youtube.