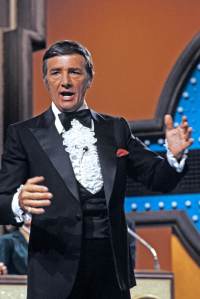 Dawson carried with him such an old school showbiz vibe (those flashy threads, the bling, the carnation on his lapel), I want there to be more of those distinctly British variety forms the music hall and the pantomime in his background. But he came along a bit later. Dawson’s a more modern figure and represents a new phase, though it has echoes and resonances of the traditional. From the seaport town of Gosport (opposite Portsmouth), he spent a few years in the British Merchant Navy, and tried his hand at boxing for a time.

When he left the service, he went into comedy, performing stand-up in the West End in the 1950s, including London’s popular Stork Club (quite a different institution from New York’s venue of the same name). His professional handle at this stage was “Dickie Dawson”. In the late 50s, he was hired to perform in a high profile cabaret show starring tempestuous British movie star Diana Dors. Dawson ended up writing much of the show and helping to create it. After a successful theatre run, it went to television. The pair developed a romance and were married in 1960. So this a crucial part of the narrative in Dawson’s life story that often gets overlooked. His springboard to fame was his association with Dors. She was a big deal at the time, she’d been in many movies (including American ones), and was groomed to be the English Marilyn Monroe.

In the early ’60s, they came to the U.S. and had a couple of kids. Dors appeared at the Dunes in Las Vegas, and did a couple more American films. But she drifted away pretty quickly. She was a big star in the U.K. and the offers were better there. She began taking work there again until she just stayed, and the couple were officially divorced in 1966. But Dawson stayed in the U.S. with the kids. And he started to get work in Hollywood. He had a bit role as a British soldier in The Longest Day (1962) and a walk-on on The Jack Benny Program (1963). But then he got high profile guest shots on The Dick Van Dyke Show (1963), The Outer Limits (1964) and The Alfred Hitchcock Hour (1964).

And then almost instant fame, as Newkirk, the tricky cockney, on Hogan’s Heroes (1965-71). The role seemed almost tailor made for Dawson’s persona. It’s why, I think, I wanted him to have a music hall past, and one wants many more performances from him like this! I’d love to have seen him in lots of movies. But things were to take a very different turn. He became a regular on Rowan and Martin’s Laugh-in for three seasons (1970-73) did a few episodes of Love, American Style (1971-73), and was a regular on the short lived The New Dick Van Dyke Show (1973-74), and after this, very little acting. From here on in, he was to thrive like a hothouse plant in game shows.

Something about the loose, improvisational format, not worlds away from a comedy club, is where Dawson seemed to thrive, and he began to develop a track record on such programs pretty early. He was a panelist or player on I’ve Got a Secret (1972-73, 1976), Celebrity Bowling (1973-76), Match Game (1973-78), and Tattletales (1974-77). Then of course, his most famous gig, host of Family Feud, from 1976 through 1985, with a return stint 1994-95. Dawson was funny and charming of course, but he also pushed the envelope on touchy-feely, kissing all the women with what seemed like excessive liberty to some, but (judging by a write-in campaign) was wildly popular with his core audience. Still, he was the quintessence of the Oily Men we wrote about here.

Talk shows were also a staple for Dawson. Most notably, he guest hosted The Tonight Show in Johnny Carson’s stead 18 times between 1972 and 1982.

In 1987, he played a parody of himself (his dark side) in the dystopian sci fi action film/satire The Running Man, based on the Stephen King novel, directed by Paul Michael Glaser (Starsky!) and starring Arnold Schwarzenegger. It was about a gladiatorial game show set in a future that was pretty much…now! It was not a dissimilar role to Jerry Lewis’s in The King of Comedy (1982), and it got good notices, but since he was playing a role so close to himself, it didn’t result in a blossoming of his acting career. In 1988, he taped a pilot for a revival of Groucho’s You Bet Your Life, but it wasn’t picked up.

After this he seems to have been pretty much in semi-retirement from show biz for the rest of his life. In 1990, his third child, a daughter, was born, and he seems to have spent his last years raising her with his 2nd wife, Gretchen Johnson, whom he’d met while she was a contestant on Family Feud in 1981. If you kiss 10,000 women, and 100 of them come home with you, I guess one of them will stay!