The Curse of the Oily Man

March is Women’s History Month. How I wish it could be an opportunity to celebrate America’s first female President this year, instead of bemoaning a President who represents the worst that “manhood” has to offer.

I’ve been planning this post for months. Maybe since around the time Trump’s Access Hollywood tapes emerged (early October 2016), but I’d been kicking it around in my head for a long time before that certainly, because Donald Trump has always been the same guy, and, well a lot of guys are the same guy. The hook was to be “oily men” — as an aesthetic, as a type. We’ll get to what I mean by that in a bit, but first I wanted to share this great, totally relevant discovery.

Apparently in Malaysia there is a latter-day myth about a creature called the Orang Minyak, or the “Oily Man” (known in Ceylon, which has a parallel myth, as the “Grease Devil”.) The Oily Man is a male human, completely naked and covered with oil, who made a pact with the devil (or a shaman or a witch doctor) so that he could win back his true love through dark arts. For the magic to work, the Oily Man must worship his dark lord, and rape 21 virgins a week. He is covered in oil so he will be too slippery to catch. And, surely also because it is disgusting. This “Oily Man” has been featured in Malaysian horror movies, and belief in him is so strong that sometimes young women will dress in dowdy clothes so the Oily Man will pass over them at night when he makes his rounds.

One the sources of the myth is a 1956 film called Sumpah Orang Minyak, or The Curse of the Oily Man, and I find that timing significant, because that’s just about the time the Oily Man comes to America.

The Oily Man is a product of the Sexual Revolution during its first phase, when the imbalance of power between the sexes was much greater than it is now. Sex outside of marriage was slowly becoming more sanctioned, but the ancient power dynamic remained in place and unquestioned. Thus women were still second class citizens, but it now also became socially acceptable in some social settings for men to openly appraise all women on the basis of sex appeal alone. In Victorian and Edwardian culture, women may have been patronized and infantilized, but it was considered shameful to openly disrespect them. Incrementally, there were changes over the years. In the 20th century women became increasingly aesthetically glamorized in the theatre, the cinema and print media. Fashions revealed more of the body. Attitudes became more relaxed. But around the mid-20th century, this trend took a great leap forward.

In 1953, Hugh Hefner launched Playboy magazine, the first American magazine that put the male objectification of the female front and center (quite literally). In 1960, he followed this up with Playboy Clubs, private reserves where men could be waited on by beautiful women in revealing one-piece bunny costumes, fully cementing and popularizing the concept of men’s self-image as Sultans or Warlords, and women as animals, trophies, and commodities, like racehorses. Pornography and prostitution had existed for centuries; it was the mainstreaming and universalizing of this mental attitude that was new. In the ultimate consumer society, a beautiful, sexualized woman became the ultimate consumer acquisition, like a car or a mansion. Enough of the older Judeo-Christian attitudes remained that this went largely unarticulated, and it was never universally approved of. But it was present and it was dominant in the culture.

The September 2016 PBS Frontline documentary The Choice told us of three seminal influences on young Donald Trump besides his father: the ruthless, red-baiting lawyer, Roy Cohn; self-help guru Norman Vincent Peale and Hefner. Certainly the ostentatious, luxurious lifestyle and the obsession with branding, in addition to the sexual attitudes of Trump owe a debt to Hefner. 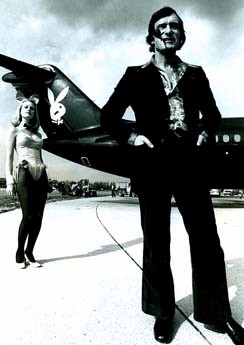 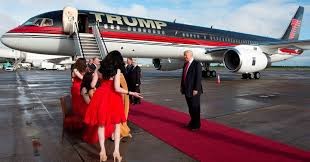 But what interests me is the question of what paved the way for a large portion of the public to accept a person in that mold in the role of America’s symbolic leader, a part previously played by George Washington, Abraham Lincoln and Dwight David Eisenhower. Something must have radically changed, psychologically and socially, for this to have been possible politically, for a certain number of Americans to embrace a man who is in no way sober or serious or respectful or trustworthy or mature to be their leader.

When I analyze American culture, I’ve always felt that a radical shift happens with the Rat Pack. It always seemed to me that Frank Sinatra and his cohorts had a lot of nerve condemning the rock and roll generation on the basis of its hedonism, when the truly major shift actually occurred on their own watch.  The celebration of boozing and womanizing and gambling, etc were the true Rubicon to be crossed; prior to this shift all of that sort of behavior was frowned on. Whatever Baby Boomer kids did (rock and roll, pot, or whatever) was a mere refinement on the earlier leap, a difference of degree rather than one of kind. Thus the Oily Men: guys like Dean Martin and Sammy Davis Junior and Peter Lawford. Jerry Lewis became an Oily Man. Las Vegas became the symbolic center of Oily Man culture. And aspects of it began to seep into films and television. Not just Rat Pack films. For example, the James Bond franchise. While Sean Connery’s Bond is more outwardly conservative in some ways, his whole persona is predicated on instantly jumping into bed with female spies whom he usually meets at the gambling table. The public has even memorized the recipe of his favorite cocktail.  The stars of I Spy were Oily Men. Robert Culp was the more obvious one. I’d never have suspected Bill Cosby of being one until I learned about the scores of women he roofied and raped. Blake Edwards was an Oily Man — most of his films make me shudder on some level; they unconsciously reveal things about the director’s nature. They make me want to take a shower.

And from pop culture, into politics. Part of the impetus for this piece was that I wanted to talk about the bi-partisan nature of how the way was paved for Trump, because there are precedents for him on both sides of the aisle. This is about character. While, there are countless political objections to Trump and Trumpism, those aren’t what truly disqualify him, what make millions of people declare him unfit for office. It’s his (lack of) character: the conflicts of interest, the deals with the Russians, and his sexual misconduct. Right? But somehow there remain astoundingly large percentages of Americans completely willing to sign off on this objectionable human being as their Leader. The way was paved for that somehow.

In several stages, new frontiers were crossed. There was JFK, with his Rat Pack friends, his bootlegging father and his adulterous womanizing. Then there was his boozing brother Ted, who killed his mistress, and escaped with impunity. There’s Bill Clinton and his Monica Lewinsky scandal. True, nothing was more odious and grossly self-serving than Trump debasing the entire process by trotting out Clinton’s wronged women prior to one of the Presidential debates. But, ironically, I feel Trump owes practically everything to Clinton, who indulged in the grossest, most piggish behavior and somehow came out the other side intact. The revelation of the truth of the Lewinsky allegations ranks with a handful of politically traumatic events for me, not far below the actual election of Trump. I feel like a certain psychological barrier was crossed there, one that made it possible for Americans to imagine their leaders a certain way. Thanks to Clinton there is a precedent, a pre-Trump precedent (and I’m sure there are others we know less about) for a sexual predator occupying the Oval Office. There have been too many similar political scandals in the years since: Jim McGreevey, Elliot Spitzer, Anthony Weiner. Their actions proved politically ruinous in every case, but not socially ruinous. One might have predicted those men would need to hide their faces for the rest of their lives. But most of them have been shameless enough to re-emerge as “political analysts” on television; the media has done its shameless part by providing them with the platform for doing so; and we have been shameless enough to watch them. Apparently, as in the Malaysian myth, the Oily Man is slippery. You can not catch him.

Another related psychological threshold was passed with the election of Ronald Reagan, a divorcee who preached but did not practice family values, and more to the point: A HOLLYWOOD MOVIE ACTOR.  As it happens, he’d also been the head of an important labor union and the governor of one our largest, richest states. He happened to be an able, experienced administrator. But a certain psychological barrier had been crossed, one which would later permit the political progress of such diverse, surreal specimens as Governor Arnold Schwarzenegger, Congressman Sonny Bono, Governor Jesse “The Body” Ventura, and Senator Al Franken. That is some weird, fucked up shit, that is. If you told anyone in 1985 that all that was coming up in the future, along with a President Donald Trump, it would have been regarded as a hilarious science fiction comedy sketch.

My point in all this is not that we are ALL ready to accept a President Trump. Many, perhaps most, of us are not, which is why #notmypresident is a hashtag and why thousands of people take to the streets every day to express how offended they are that this has happened. Rather, this is to explore how it might be possible that SOME people, anyone at all, might have been ready to do what would have been considered unthinkable a century ago, which is put a guy who is essentially the spiritual heir of Caligula into the White House. All of which goes to say that this is on all of us in some way, whether we voted for him or not. Our culture made this possible.