The Cowsills: Original Model for “The Partridge Family” 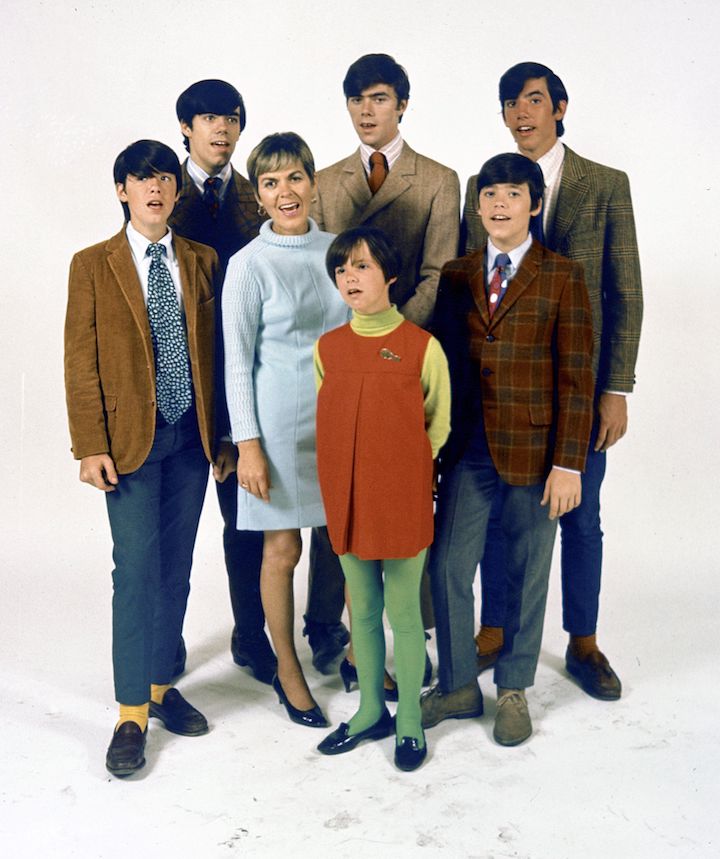 I’ve saved this post about the ’60s pop band The Cowsills for months so that it would publish on the birthday of its most unique member, Barbara Cowsill (1928-1985), the mother of the other six (and a seventh who didn’t join the group). The Cowsills are now famous as the real-life model for The Partridge Family, who then eclipsed the template in fame, but in their day the original outfit enjoyed their time in the sun as well. As an act, they were something like a mash-up of The Seven Little Foys, The Beach Boys and The Osmonds. I’ve always felt a special bond with them because they’re from my home state of Rhode Island.

Bud Cowsill, the father, was a navy man. The family was musical largely through Barbara’s influence, they were taught to sing harmonies from a young age. The core of the band was formed by older sons Bill and Bob, who admired and emulated the Beatles. They were then joined by their younger brothers Barry (bass) and John (drums). Their father began to manage them, and at his insistence, their mother Barbara, and youngest siblings Paul and Susan joined. At the group’s peak, the kids ranged in age from about 8 to 18. The seventh Cowsill child, Richard, who was Bob’s twin, was said to particularly resemble Bud, who had some kind of animus against the kid and kept him out of the band. Richard was to serve in the Vietnam War and was thus oddly alienated by his own family’s success.

And the Cowsills enjoyed wonderful success. They were signed to MGM Records in 1967. Their single “The Rain, The Park and Other Things” sold over a million copies and became a #2 hit on the pop charts. It’s probably best known by the first line in the chorus “I love the flower girl”. The tune was memorably used by fellow Rhode Islanders the Farrelly Brothers in their 1994 movie Dumb and Dumber. Their next hit was “Indian Lake” (1968), which went to #10. And their last big hit, maybe their best known, was their 1969 cover of the title song from the musical Hair, which went to #2. Along the way the novelty of their act made them a shoe-in for appearances on variety shows and talk shows like The Ed Sullivan Show, The Tonight Show with Johnny Carson, Kraft Music Hall, The Mike Douglas Show, and many others. They also had their own NBC TV variety special in late 1969 called A Family Thing, which was oddly hosted by Buddy Ebsen (I guess because Jed Klampett was patriarchal?)

Meanwhile the Cowsills’ actual patriarch proved not to be ideal. Like many another paternal show biz manager (Joe Jackson, Murry Wilson), by all reports Bud was an abusive tyrant, not just keeping Richard out of the band, but later firing Bill, one of the founders. He seemed to have had rage issues and worse. He cancelled eight of nine scheduled appearances on The Ed Sullivan Show due to technical issues. And somehow the band got shut out of The Partridge Family gravy train, which launched in 1970.

The original Cowsills ended in 1972. Most of the family kept a hand in the music business. Their reunion at Barbara’s funeral in 1985 became the first stirrings of a revival, and off and on since that time, different line-ups of the band have performed as a nostalgia act. And the various members have maintained their own separate music careers as well. In a horrific one-two whammy, Barry died by drowning in New Orleans in Hurricane Katrina, and hard-living Bill died the night before Barry’s memorial service.

I got a lot of this information from the documentary Family Band: The Cowsills Story (2011), which I liked so much I watched it twice in a row. Literally after watching it the first time, I pushed play and watched it again. (I admit this is partially because there are so many damn members of their family it’s hard to keep them all straight.) Oh my God, Barbara Cowsill’s Rhode Island accent in old TV clips is to die for. She was two years younger than my mother. I’m not from any famous TV family, but I sure do relate to these Cowsills.