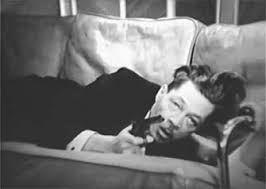 These days Housman is best remembered for the last decade of his career, during which he was a bit player who specialized in comic drunks, but he’d been acting in films since 1912, and and onstage for several years before that. According to the promotional periodical The Edison Kinetogram, the NYC-born Housman started out in show business as a teenager, touring with a musical called Queen of the Moulin Rouge before serving a four year apprenticeship in vaudeville, supporting big time comic pantomimist Signor G. Malasso. As early as 1912 he began starring in comedies for Edison. His time at the studio climaxed with one year stint (1914-15) in a comedy team with William Wadsworth. In the late teens he worked for Selig, Lubin and other studios, then briefly formed his own studio in 1922, which rapidly went under after only a couple of pictures. He was teamed with Katherine Perry in 1927 for a short-lived Fox series called “Harry and Warren”, while taking smaller roles in major studio features like The Bat (1926), Sunrise (1927), Fools for Luck (1929) with W.C. Fields and Chester Conklin; The Singing Fool (1928) with Al Jolson; Queen of the Night Clubs (1929) with Texas Guinan; Broadway (1929) with Merna Kennedy and Glenn Tryon; and a 1930 screen adaptation of David Belasco’s Girl of the Golden West.

The scuttlebutt was that Housman was a tippler himself; it is unknown and unknowable how much of his alcoholic routine was due to actual alcohol. Arthur Housman succumbed to pneumonia at the relatively young age of 52.