The Villain Still Pursued Her 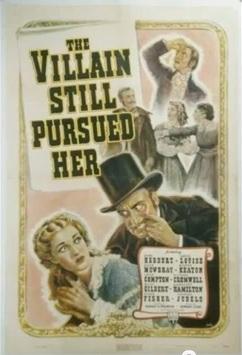 Today is the anniversary of the release date of the all-star camp romp The Villain Still Pursued Her (1940).

Why this hoot of a movie didn’t make it into the canon of comedy classics, I don’t know, but it’s an injustice of history I hope to help rectify. It may be that it is too dry and obscure. As a spoof, it was well ahead of its time; unsophisticated audiences of the day mightn’t have even known it was a comedy. The film is a parody of old temperance melodramas like The Drunkard and Ten Nights in a Bar-Room. W.C. Fields had poked fun of same in The Old Fashioned Way (1932), but he provided plenty of context, making it a play within a play. Here, it’s just straight up spoof with a take it or leave it attitude. Decades later, audiences learned how to read such straight-faced kidding in films like Dr. Strangelove (1964) and Young Frankenstein (1974). But by that time, the references in The Villain Still Pursued Her were no longer common currency so the film remained unappreciated.

But I think it is brilliant and smart and constitutes a delightful “missing chapter” from the careers of a long list of stars we know in so many other contexts, including director Eddie Cline, Billy Gilbert (as the announcer), Buster Keaton (here ironically cast as the voice of sobriety), Margaret Hamilton, Anita Louise, Hugh Herbert, Franklin Pangborn, Richard Cromwell, and Alan Mowbray as the hissable villain.

You hear? It’s required viewing! Here it is: