Today is the anniversary of the release date of the Paramount film Mrs. Wiggs of the Cabbage Patch (1934), directed by Norman Taurog. The ostensible star of the film is the stage actress Pauline Lord, who only made two movies in her career. But look at that poster: supporting players W.C. Fields and Zasu Pitts are the ones audiences mostly cared about, then and now. 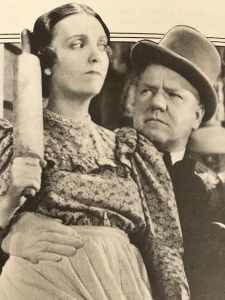 This is the sort of movie they really don’t make any more: an old fashioned meller without irony. The plot is literally about a struggling mother with a large brood of children who will be thrown out of her home soon if she can’t make a mortgage payment. She has such a large number of children I’ve always thought the character was based on “the Old Woman ion the Shoe”.  But it’s no joke — one of her children is dying. And her husband (Donald Meek) has gone off to the gold fields of Alaska, leaving her stranded. The screenplay was based on a 1901 novel. Two silent movie versions preceded this film, and yet a fourth version was made in 1942. So people liked it very much at the time.

We often think of Micawber as being Field’s only “straight, literary” part, but this film complicates that assertion. Yes, his role here is comical but Fields has enhanced that element. Technically it’s a real role in a drama, adapted from a book. Pitts and Fields are the subplot of this story. Even as Mrs. Wiggs struggles with her own problems, she still has room in her heart enough to help a neighbor (Pitts) who wants badly to marry a man but can’t cook. She meets Fields through a matrimonial service and serves him food that was secretly cooked by Mrs. Wiggs. He’s ready to sign on the dotted line, but Pitts finally has a revelation — maybe she doesn’t want a man who loves her only for her cooking. Fields is terrifically funny in his part, which he has clearly re-written to suit his screen character. Today he is the only reason anyone ever watches this film.

But there is one added bonus. The film contains a scene where the whole family attends a vaudeville show. It’s a rare chance to see the team of of Shaw and Lee do their act! (Thanks, Ron Hutchinson, for the reminder about that scene!)

For more on comedy film history please check out my new book: Chain of Fools: Silent Comedy and Its Legacies from Nickelodeons to Youtube, just released by Bear Manor Media, also available from amazon.com etc etc etc. To find out about  the history of vaudeville, consult No Applause, Just Throw Money: The Book That Made Vaudeville Famous, available at Amazon, Barnes and Noble, and wherever nutty books are sold.