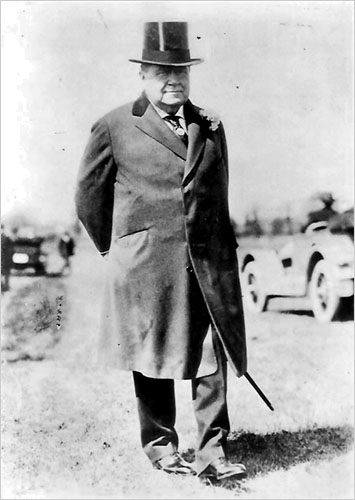 A tribute today to that great New York character Diamond Jim Brady (1856-1917). I feel like I’ve known about this legendary personage my whole life; the only way I can imagine I’d heard about him as a child is that I must have seen one of the two movies in which Edward Arnold played him, Diamond Jim (1935, written by Preston Sturges) or Lillian Russell (1940). I think I recall having seen the former film on TV when I was a pretty young kid.

Brady was in a relationship with “American Beauty” Lillian Russell for 40 years, supporting her financially, showering her with lavish gifts (including the trademark precious gems that gave him his nickname), and consorting with her publicly at resorts like the Broadway restaurant Rector’s. It used to be taken as a given that they had an intimate relationship, but was time has worn on, little evidence of such has turned up. 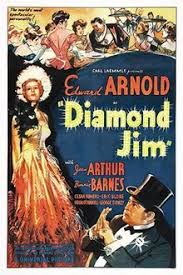 Railroad magnate Brady was known as much for his gourmandizing as he was for his penchant for collecting rare stones. His epic eating sessions were the stuff of record books. When Brady died his stomach was found to be six times the size of an average man’s. This was the heyday of rich food, all lobsters, steak, chops, oysters, champagne. He was only 60 when he died of his inevitable heart attack, probably with few regrets.

This high living had to have been in part a celebration of how far he’d come. Of Irish immigrant stock, he started out in menial jobs (messenger, bell-hop), became a secretary to an executive at the New York Central railroad, began selling railroad supplies and train cars, and finally amassed enough capital to speculate in stocks and so forth. In the Gilded Age, there was a fine line between capitalist and criminal; Brady had an air of both. But he was also known for his charity, giving large sums to prominent hospitals in particular. He was said to have been worth $10-20 million at the time of his passing, the equivalent of a billionaire in our day.