Born in Smith Center, Kansas, Arbuckle moved with his family to Santa Ana, California the following year. His mother died when he was still a child, and his cruel and abusive father (who suspected Roscoe was not his child) deserted him soon thereafter.  Arbuckle supported himself with a job at a hotel until a friend convinced him to enter an amateur singing contest. A talent scout noticed him and soon he was touring the west with Frank Bacon’s Stock Company. In 1904 he started working the Pantages circuit. The following year found him performing briefly with Leon Errol’s burlesque company out of Portland, Oregon.

He had been in films as early as 1909 (at the Selig Polyscope Company) but no one – including himself – had known what to do with him, so he went back to the theatre for a couple of years.

In 1913 he began working for Mack Sennett, and became a big star almost instantly. Sennett knew how to use him, casting him right away in such chestnuts as The Waiter’s Picnic and Help! Help! Hydrophobia! (both 1913). Arbuckle (now nicknamed against his wishes as “Fatty”)  specialized in lazy, seemingly retarded lummoxes and worthless sons, often attired in a small derby, crewneck jersey, too-short trousers and suspenders. It was Arbuckle who would take up the rube parts that might have been Fred Mace’s or Mack Sennett’s in earlier years. His big size was offset by pleasing features and a surprising physical grace. He was also easily the greatest of all the drag comedians to come out of Keystone, donning petticoats and skipping and gamboling like a six year old girl at the slightest provocation. Audiences found him hilarious, and they pretty much still do.

In 1917, the Schenck Brothers at Metro gave him his own company at Metro, the Comique Film Company, where his supporting players were Buster Keaton and Arbuckle’s nephew Al St. John. In 1920, Arbuckle left to make a series of features at Paramount, bequeathing Comique to Keaton. 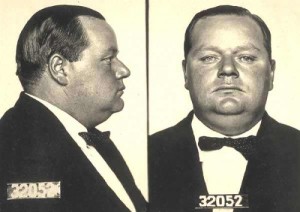 The following year, in the wake of his completion of three features, Arbuckle let off a little steam, in the patented twenties Hollywood fashion – with a wild, sensational party. Unfortunately, shortly afterwards, one of the attendees Virginia Rappe, died.  Arbuckle was put on trial for the crime (if there was one), and, though acquitted, the country and the movie industry turned against him. He was blacklisted. More on the Arbuckle scandal here.

After trying unsuccessfully for many months to get movie work, Arbuckle took the only employment he could get: vaudeville. Alexander Pantages took a chance on him in 1924, booking him for his San Francisco Theatre. He also turned up at Loew’s State in New York in 1928. These dates were sporadic and Arbuckle didn’t go over well. Whether it was audience prejudice related to the scandal, or Arbuckle’s shaken confidence owing to same we will never know.

Gradually, Arbuckle worked his way back into the medium he knew something about.

By 1927 he was directing Marion Davies in the feature The Red Mill under the pseudonym William B. Goodrich. And by the early 30s, the blacklist was lifted. Arbuckle appeared in a series of popular sound shorts for Warner Brothers. And these were recently released on DVD! There’s only a half dozen of them, but they are quite funny. Most of them are roughly remakes and rehashes of the shorts he had done at Comique, now with the added benefit of getting to hear Roscoe talk. And you know what? He talks just like you think he would.

Arbuckle’s death by heart attack in 1933 was a true loss for comedy film. While I don’t think Arbuckle was any major auteur as a director, the things he could have gone on to do as a comedy star could have been quite great. But alas, it wasn’t to be. As with John Belushi, John Candy and Chris Farley, Heaven appears to want to reclaim our big funny men before their time.

To learn more about silent and slapstick comedy including top stars like Fatty Arbuckle, don’t miss my new book Chain of Fools: Silent Comedy and Its Legacies from Nickelodeons to Youtube