The Other Joe Schenck 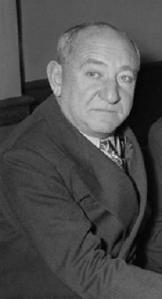 Today is the birthday of Joseph M. Schenck (1878-1961). We refer to him as the “Other” Joe Schenck, because we have already written about another one, who was one half of the vaudeville team of Van and Schenck. We know how liable you are to mix them both up.

This Joe Schenck was actually a much more significant figure in show biz history. Born in Russia, he emigrated to the U.S. with his family when he was 15. His show business start consisted of operating a concession at an amusement park with his brother and first business partner Nicholas. By 1909 he had purchased Palisades Amusement Park in New Jersey. Around the same time, he became partners with Marcus Loew in the People’s Vaudeville Company, a chain of theatres that presented vaudeville performers intermingled with silent films (this would grow into the mighty Loew’s chain, and thence to MGM). 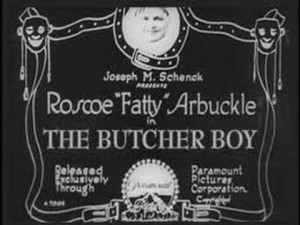 In 1916 he married Norma Talmadge, then a star at Vitagraph. That same year he formed the Comique Film Corporation to produce the independent films of Fatty Arbuckle. Buster Keaton came aboard in 1917 at Arbuckle’s invitation. Keaton’s association with Schenck was to be one of the most crucial relationships of both his career and his personal life. Keaton was to marry Norma Talmadge’s sister Natalie, and he stepped into Abuckle’s starring role at Comique in 1920. It was also on Joe Schenck’s advice that he later signed with MGM, a move which was to prove financially advantageous but artistically frustrating for Keaton. 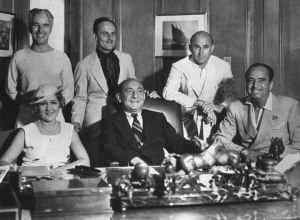 In 1924 Schenck was brought in by Charlie Chaplin, Douglas Fairbanks and Mary Pickford to be the first President of United Artists.

In 1933 he formed 20th Century Pictures with Darryl F. Zanuck. They merged that company with the Fox Film Corporation two years later to form 20th Century Fox. Schenck was its first Chairman. In 1941 he was forced to step down when he did jail time for income tax evasion. Later released by presidential pardon, he returned to Fox and stayed there until felled by a stroke in 1957.

For more on show biz history consult No Applause, Just Throw Money: The Book That Made Vaudeville Famous, available at Amazon, Barnes and Noble, and wherever nutty books are sold.