On the Greatness of John Candy 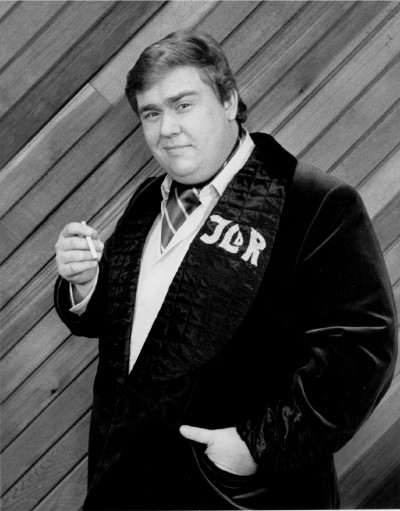 Tribute today to the late, lamented John Candy (1950-1994). “There’s always a role for John Candy,” I used to say to my pals in the SCTV days, the thrust of my meaning being that, no matter the scenario or the premise, there always seemed to be a role to fit what was then a more unusual body type: a big fat guy. And of course, as I’ve often remarked the show business world has always had at least one funny fat man on tap throughout the ages: John Bunny, Fatty Arbuckle, Oliver Hardy, Lou Costello, Jackie Gleason, John Belushi….But Candy was a new phenomenon, because, like all of his SCTV cast-mates, he had range. On the show, he memorably played Orson Welles, Julia Child, Divine, Pavarotti, Tip O’Neill, Merlin Olsen, and even, thanks to a bit of hilariously insensitive video wizardry, Herve Villechaise. Even more rewarding for the opportunities they gave for him to show off his acting chops were his recurring original characters like Johnny LaRue, Mayor Tommy Shanks, Willy B. Williams, Dr. Tongue, Yosh Shmenge, Gil Fisher (the Fishin’ Musician), and Harry, the Guy With the Snake on His Face.

It was initially thrilling to see him emerge in major movies. He’d actually been appearing in films since 1973, but in the late 70s/ early 80s had small roles in the really big pictures 1941, The Blues Brothers and Stripes. In 1984 he played the funny best friend in Splash and this is what pushed him over into star status. Sadly, like almost all of our great comedians of the last half century or more, he went on to make a string of movies that across the board have to be categorized as trivial junk. Lest ye protest this or that exception — I have to say, no, I’ve looked carefully over his filmography and I would characterize all of these movies as disposable, and that includes his 1991 experiment in pathos Only the Lonely with Maureen O’Hara.

But his television work on SCTV remains untouched.  Unfortunately, there’s little of it on Youtube (rights, you know). But here is a terrifically insightful interview about him with his friend and colleague (and one of my favorite comedians) Eugene Levy:

To find out about  the history of show business including television variety, consult No Applause, Just Throw Money: The Book That Made Vaudeville Famous, available at Amazon, Barnes and Noble, and wherever nutty books are sold. And for more on classic comedy check out my new book: Chain of Fools: Silent Comedy and Its Legacies from Nickelodeons to Youtube, just released by Bear Manor Media, also available from amazon.com etc etc etc