On the Many Screen Versions of “The Turn of the Screw”

In response to trhe recent release of Mike Flanagan’s The Haunting of Bly Manor, we rejigger this earlier post on Henry James’ 1898 The Turn of the Screw, the novella on which it is based, and its previous film versions.

The Turn of the Screw was my pathway into an appreciation of James which I didn’t reach, honestly, until I was middle-aged. Previously I had tackled some of his later novels, and frankly didn’t much enjoy their density, his labyrinthine thought processes, or his convoluted writing. This, on top of my admitted class biases against his privileged protagonists, left me little to savor. It was The Turn of the Screw, along with other earlier stuff, like Washington Square and Daisy Miller that finally won my approval, and then formed a pathway that allowed me to go back and enjoy the more challenging later work, even if I often wish a Jack London character would burst in and upturn a few of those drawing room chairs. I am not ashamed to say that Stephen King’s Danse Macabre was what made me first want to give The Turn of the Screw a shot, which I finally did, long before seeing any of the movie versions.

Like Wilde’s The Picture of Dorian Gray and Stevenson’s The Strange Case of Dr. Jekyll and Mr. Hyde, James’ novella alludes to moral horrors we scarcely dare contemplate, but in a vague, non-graphic way that makes it hard to put your finger on. It’s generally called a horror story for lack of a better name but it is at once more and less than that. It’s a ghost story with possible demonic possession, but maybe not, perhaps it’s madness and there are intimations of such things as rape and child abuse. It’s a tale of a governess at a remote country estate in charge of two very disturbed children. The house is nearly empty but for a few servants and the children…and perhaps some spirits. Unless the sexually repressed governess is going crazy herself.

Truman Capote wrote the script, based on William Archibald’s 1950 Broadway play. It’s a testament to both the dicy nature of the material, and the skittishness of the times, that it took a a half-century for the story to make it to the stage, and six decades to make it to the screen. Directed by Jack Clayton (later of 1974’s The Great Gatsby, et al) it is now considered a classic, and probably remains the best big screen version of the tale, thanks to Deborah Kerr’s incredible performance, the moody cinematography, the jarring editing, and the whole package. A moment towards the end, where she kisses a little boy back to life, has not lost its power to shock.

A prequel to A Turn of the Screw directed by Michael Winner and starring Marlon Brando (with quite an Irish accent) and English horror star Stephanie Beacham, playing the servant characters who are ghosts in the James tale. The impeccable Harry Andrews is terrific as the absentee uncle. It was Brando’s last film prior to his smash come-back year of 1972. Casting him as Quint is a bit of genius; the role recaptures the unsettling menace of some of his early roles and then some. 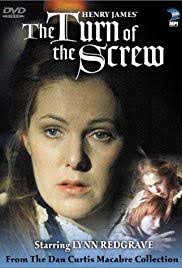 Horror maven Dan Curtis directed this one for BBC-TV, starring Lynn Redgrave. This adaptation features lots of narration made up of James’ own writing. The lad in the story is played by an age-appropriate boy (about 14 in the story), which files off some of the jarring elements in the tale, which can be quite alarming when it’s played by a younger kid. Redgrave is kind of a superficial actress, making this version lighter than it ought to be. Like all the Beeb product of the time, it’s cheap looking video with no graphic subtly or mood, just harshly blazing lights. But that drawback also adds interesting effects such as clearly seen ghosts, an actor in make-up outside the window (as opposed to misty brief glimpses). Solid TV, though quite a different animal from the cinematic versions.

Another three decades passed before the next proper movie of The Turn of the Screw, an indication of how admired the original version had been. It was written and directed by one Rusty Lemonade who had previously worked with Francis Ford Coppola and George Lucas on Captain EO (1986), and had made his own version of Journey to the Center of the Earth (1988). His take on the material is sort of Ken Russelesque, stylish, sexy and spooky, and re-set in the 1960s, with Julian Sands in the role Michael Redgrave had played in the original (the Guardian), Marianne Faithfull as the Narrator, and gorgeous singer/actress/model Patsy Kensit in the lead. As a child, Kensit had appeared in Jack Clayton’s The Great Gatsby, making a small world even smaller!

This made for TV version changes the names but sticks close the to story. It features Valerie Bertinelli (who’s not quite up the job) and Diana Rigg. The whole thing is on Youtube at this writing if you’d like to check it out. 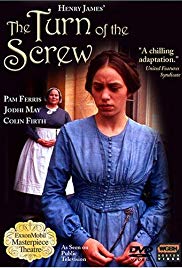 I believe this was the first screen version I ever saw. It features Colin Firth as the handsome “Master” whom governess Jodhi May becomes infatuated with, adding another level to the tale. It was a British TV movie. 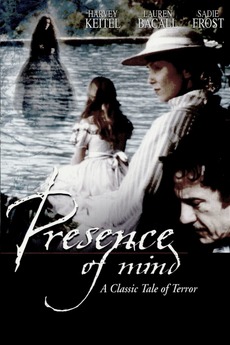 A Luxembourgian-English co-production set in the present day, with LeeLee Sobieski as an art teacher who gets “too involved.” Interestingly, the housekeeper in the film, usually played by a mature woman, is played by a young attractive one, adding a lesbian layer to the tension. An effective horror movie. Sobieski’s next film was to be Neil LaBute’s remake of The Wicker Man.

This one has been reset in the 1920s thereabouts, with two stars of Downton Abbey in principal roles, Michelle Dockery as the nanny, and Dan Stevens as a psychiatrist in an invented series of scenes featuring Dockery in an insane asylum. I found the direction of this remake too flashy, literal, obvious, and subservient to the perceived needs of contemporary horror. I did like the casting of two creepy blondes as the kids, though, evoking Village of the Damned.

This new adaptation was executive produced by Steven Spielberg, and has been reset (for some reason) in the 1990s. Mackenzie Davis stars. It was released just before the pandemic hit, so I didn’t get a chance to catch it when it was at my local theatre (which has since closed for good). Once I’ve seen it I’ll post a review, though from the trailer I already suspect that it’s full of “boo! gotcha!” tactics and other heavy handedness that will turn me off. We shall see. It’s 13% approval rating on Rotten Tomatoes doesn’t exactly bode well. If it’s not about the acting, I don’t care how many spiders crawl out of somebody’s mouth.

Just released! This is Mike Flanagan’s follow-up (not sequel, as some have called it) to his terrific re-envisioning of Shirley Jackson’s The Haunting of Hill House. The Haunting of Bly Manor is at once an adaptation of The Turn of the Screw, a work of Turn of the Screw fan art, and something larger that incorporates other literary and cinematic works and lots of its own original innovations. (Is the tune the little girl keeps humming the same melody as the theme to Rosemary’s Baby?) Anyway, I am love with this production — it has surpassed The Innocents as my favorite version. It is gripping, restrained, and heartfelt. As with Hill House, and some of his films, Flanagan understands the emotional underpinning of any ghost story. WHY would a spirit linger to haunt a place or a person? Sadness, anger, confusion. His nine episode telling is perhaps a bit more complex than it needs to be, incorporating many layers over many time periods. It loses focus. and would be far better if it focused on the core characters rather than expanding the minor ones. But while he may err to the point of excess in the structure, he almost never reaches for cheap, meaningless effects. There is a justification (beyond “boo”) for everything. And as with his previous series, one can’t stop watching it. One is COMPELLED to binge on it. He also done a wonderful job of making this traditionally VERY white story inclusive, and he’s managed to do it in an organic, logical way that is not heavy handed (as such efforts sometimes are). Cast includes Victoria Pedretti, Oliver Jackson-Cohen, Amelia Eve, T’Nia Miller, Rahul Kohli, Tahirah Sharif, Henry Thomas, Amelia Bea Smith, Benjamin Evan Ainsworth, Kate Siegel, et al. The kids (Smith and Ainsworth) are standouts — I think there are the best actors ever to play these roles). SEE IT NOW, WHILE IT’S STILL HALLOWEEN SEASON!