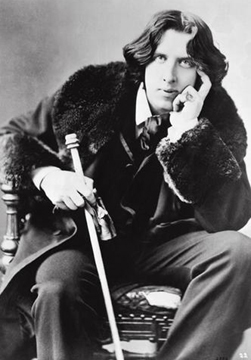 To be a comedian and critic, classicist, playwright, public personality and gadfly all at the same time — that seemed (and seems) like the guy to be. Joe Orton, John Waters, Kenneth Tynan, Charles Ludlam...would any of those personalities have existed without him? Maybe, but they would have been far less interesting without his template to go by.

My interest in Wilde started around 1990 (at the same time I was discovering Barnum and Herbert Spencer and much else), while I was working in a bookstore and consuming ideas at a prodigious rate. Wilde’s work seemed another piece of my developing libertarianism, a positive expression of it. He was someone who had tested the limits of freedom, and suffered a kind of martyrdom for it. I loved the flippancy of his paradoxes; the truths he found by turning all received and commonplace wisdom upside down. I especially loved his critical writing and essays, e.g. “The Decay of Lying”, “The Truth of Masks” and “The Critic as Artist”. Wilde’s writings on art also drove me backwards to look into his own influences, principally Pater and Ruskin. Also, around this time I was crazy about Camille Paglia whose Sexual Personae had come out in 1990. She is an apple off of his tree, I think; she enhanced my appreciation of Wilde immeasurably.

In 1992, I saw Al Pacino as Herod in Wilde’s Salome at Circle in the Square. (Years later I was to learn of this play’s long shadow in the vaudeville world; read about that here). That year I also saw Sir Peter Hall’s version of An Ideal Husband at the Old Vic, on my one and only sojourn in the West End — to date, that is).

It always rankled me that Robert Brustein didn’t include Wilde among his featured playwrights in The Theatre of Revolt. I understand the reasoning. Wilde was a classicist and he wrote to please the masses. He was never out to explode existing forms, only perfect them. Yet somehow he embodies the idea of the romantic artist as rebel-martyr, at least in the way that he lived, far more than many of those Brustein included.  And when you truly think of it….Ibsen, Chekhov and Shaw were actually swimming WITH the tide in their era, the whole movement in the 19th and 20th centuries being towards greater realism. By embracing artificiality, it seems to me, Wilde anticipates the absurdists, and is actually a step ahead of his contemporaries.

It wasn’t until I had children of my own to read to that I discovered Wilde’s fairy tales, written for his own two boys a century earlier: The Happy Prince, The Selfish Giant, The Remarkable Rocket. And now that we are in Halloween season, one must heartily recommend Wilde’s only novel The Picture of Dorian Gray, a Stevensonian foray which interpolates many of the more rascally epigrams from his essays.

Some of those quotes were used against him at his trial.

In 1997, Stephen Fry’s bio-pic Wilde came out, largely based on Richard Ellman’s 1987 book. I must confess that I am not crazy about either. I find myself uninterested in any portrait of this complex man that appears to reduce him to his sex life. Everyone has a sex life; Wilde was a genius. That this brilliant thinker and artist was persecuted and suffered on account of his sex life naturally makes the blood boil, but not just because he didn’t do anything wrong. It’s because he was one of the most valuable men of the age and that still didn’t matter, or wasn’t perceived by his bigoted contemporaries.

I much more enjoyed Moises Kaufman’s 1997 play Gross Indecency: The Three Trials of Oscar Wilde, which I reviewed for my ‘zine The Herald of Freedom. Why? Because Kaufman was smart enough to get out of the way. The trial transcripts make ripping good theatre all by themselves, revealing the brutish prejudice and ignorance of Wilde’s persecutors, and Wilde’s wisdom and wit, all in their own words. It is like a bell that was rung so clearly it has resonated for over a century.

And I think this hasn’t been sufficiently brought out: Wilde was infatuated with Catholicism his entire adult life. It stands to reason; historically, this particular brand of Christianity made itself acceptable to Rome by marrying Christ’s noble ideas to the sensuousness and aestheticism of the pagans. It was a kind of way of getting back to the Greeks, for whom the material and the spiritual, life and art,  were one. It has always seemed to me that, perhaps unconsciously, he chose his particular end for this reason. He had the option of fleeing to France rather than sit in the dock, remember. But how shifty, how messy that would have been. Instead, like Socrates, like Joan of Arc, like Christ, he chose a beautiful death, with shape and meaning and purpose…his life and his death both an attempt to tie together the three Socratic ideals: Truth, Beauty and the Good.

Now, here’s something. A few months ago, the Countess and I, who both suffer from completion mania, watched this entire (rather dull) 1978 BBC miniseries about Lillie Langtry. Wilde appears as a major character in it;  he and Langtry were great friends for a time.