When Diana Rigg Had Her Own Sitcom

It would no doubt be difficult to convey to younger people who know Dame Diana Rigg (b. 1938) primarily or exclusively as Lady Olenna Tyrell on Game of Thrones, her power as a sex symbol four decades ago. Rigg blasted to international fame as the co-star of The Avengers (1965-1968), an extremely stylish British spy show (which I’ll no doubt blog about in future as it’s my favorite of the ’60s spy franchises). When we first knew her, Rigg was always tricked out in mod gear, mini-skirts, and often even fetish-wear, leather pants, boots and gloves and the like. She was always in motion, leaping, doing karate, kicking men’s asses. Her ability to get male spectators’ engines running is legendary, almost supernatural. TMI, but she totally jump started my libido well before puberty, and I only feel free to share that tawdry fact because nearly every other heterosexual man my age I’ve ever talked to says the same thing (and even women and gay friends tend to say, “No, I get that, I get it, absolutely). It’s her self-assurance I think. She’s a beautiful woman, but there are a lot of beautiful women. There is no substitute for strength. 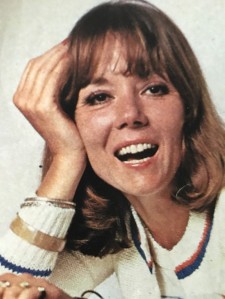 Adding a layer of intrigue is that Rigg was never quite comfortable with her sexy public image and she did what she could to wiggle out of it. She was a Bond girl in On Her Majesty’s Secret Service (1969). A Bond wife, actually. But most of her work wasn’t like that. Rigg attended the Royal Academy of Dramatic Art, and was a member of the Royal Shakespeare Company (1959-1964). She has spent a lot of time in the theatre, and has performed countless classical roles. Yet her screen career has been sort of lackluster. She seldom takes movie roles and when she does, they’re kind of random and low-key, such as Paddy Chayefsky’s The Hospital (1971), the Vincent Price horror romp Theatre of Blood (1973), The Great Muppet Caper (1981), Agatha Christie’s Evil Under the Sun (1982), and The Painted Veil (2006) are some of the ones I’ve seen and that represents a good percentage of her output! Compared to roles like Medea (whom she played to great acclaim on West End and Broadway in the early ’90s) one gets the feeling that the ordinary fodder most actresses are obliged to chew on are simply not for her. She’s clearly extremely bright, and even a bit conservative.

Which is prologue to a brief misfire in the mid ’70s. In 1973, when Diana aired, Rigg was still hot in America, thanks to syndicated reruns of The Avengers (this was the era in which I would have first seen the show). And the success of The Mary Tyler Moore Show had suggested that shows about single career women in big cities could be hits. The premise of Diana was that she was a fashion designer just moved to New York City. David Sheiner (Roy from The Odd Couple) played her boss. Barbara Barrie (Barney Miller’s wife) played the boss’s wife. Richard Mulligan from Soap played a friend. Familiar comic actor Richard B. Schull (whom I wrote about earlier in Holmes and Yo-Yo) played a co-worker. And actor/director Robert Moore (best known for being in the stage version of The Boys in the Band and lots of collaborations with Neil Simon) was typecast as a flamboyantly gay window dresser.

This is a lot of sitcom juice. But…Rigg is not a comedienne. She is a Great Actress. And she can do comedy (especially now that she is older and can draw blood with a cutting remark). But she does come across as earnest (as opposed to “wisecracking”). And at the time this show was made, she was trying to get away from her sex symbol identity, which certainly might have been played upon for comic purposes, especially given the scenario…a fashion designer in NYC in the ’70s? You could do it now as a period piece and it would be hilarious. But it would need to be risque. (Absolutely Fabulous plus The Deuce!) But television — and Rigg at the time — were cautious. So the show only lasted one season. But I’m sure she was more than okay with that. Immediately after this gig she went back to London to appear in Pygmalion in the West End. If you’re curious (I know I was!) there are clips of Diana, including one entire episode, on Youtube.