Why You MUST See “Paradise Alley”

Today is the birthday of stage and screen Renaissance man Hugo Haas (1901-1968). Haas is an intriguing cinematic figure whom I am only just now discovering for myself, and the process is giving me great joy.

Of German-Jewish parentage he was born in the city of Brno, the capital of Moravia, which was part of the Austria-Hungarian Empire at the time of his birth, but was incorporated into the new nation of Czechoslovakia after the First World War. Haas became a star of Prague’s National Theatre, and by the 1920s he became a popular film actor as well. In the mid-30s he expanded his reach, also become a successful film director. His biggest hit while still based in his native country was Skeleton on Horseback (1937) an adaptation of a play by Karel Capek, best known to many of our readers no doubt as the author of R.U.R.

Like so many others, Haas was displaced by the Nazi takeover of Czechoslavakia (1938-1939). It took several years for him to make his way to Hollywood, where he begins to show up as a character actor by 1944. He was successful as such for several years, in films like The Private Affairs of Bel Ami (1947), The Fighting Kentuckian (1949) and King Solomon’s Mine (1950). 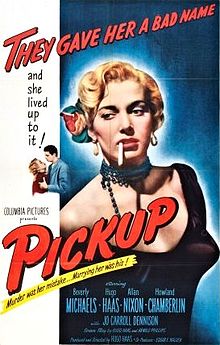 But unlike many refugee film directors from France and Germany whom one might rate as his peers, Haas was unable to get a foothold with the major studios as a director. Nothing daunted, at a time when such risk-taking was rare, he poured his income from acting into his own independent films which he wrote, directed, produced and starred in himself, a series of seedy, gritty, sensationalist noir melodramas with titles like Pickup (1951), One Girl’s Confession (1953), and Bait (1954). The films were not highly-rated by the critics, but netted enough profit to keep him going as long as demand for B movies remained. 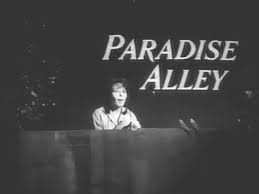 By 1959, That B movie market had dried up, and he seemed to be at the end of the line. There seems to be some awareness of that in his last film Paradise Alley (completed 1959, released 1962). Much like Shakespeare’s The Tempest, it is a highly self-reflexive work, a kind of valedictory statement. And it has the kind of mix of intellectual pretension and seedy poverty row folk-art non sequitur that graces such wide-ranging films as Orson Welles’ Mr. Arkadin (1955), Roger Corman’s Bucket of Blood (1959), and Utopia (1951) starring Laurel and Hardy.

Haas plays a once-famous German silent-film director named Mr. Agnus (Latin for “Lamb”, i.e. Christ), who moves into a slum neighborhood which evokes everything from Elmer Rice’s Street Scene to Dead End to the then-current West Side Story. Like the latter, it has a Romeo and Juliet thing going, with the star-crossed lovers played by former Miss Universe Carol Morris and Don Sullivan, star of such epics as The Giant Gila Monster (1959) and Teenage Zombies (1959). The neighborhood is a seething cauldron of sex, hatred and violence. A gang of not-so-juvenile delinquents, all of whom seem to be about 47 years old, run around; one of them is played by Duke Mitchell, who’d co-starred in Bela Lugosi meets a Brooklyn Gorilla seven years earlier, but is ignominiously overshadowed by bigger stars in this film.

Amazingly, Paradise Alley does have a large number of well-known names in the cast, although at the time the film was made, most of them were either former stars or would only later come to have cults of fans in retrospect. And this really fuels the down-at-the-heels Hollywood magic of this film in a manner that recalls Sunset Boulevard. Morris’s parents are played by comedian Billy Gilbert and former silent star Corinne Griffith. Sullivan’s mother (and Gilbert’s enemy) is played by none other than Margaret Hamilton. Familiar character actress Almira Sessions is the landlady. Noir sexpot Marie Windsor is the provocative burlesque dancer just across the way. Silent comedian Chester Conklin, in one of his last roles, plays a retired Hollywood camera man; character actor Pat Goldin, best known from Jiggs and Maggie comedies, plays another retired film professional. And Tom Fadden, who’s in everything, is in this as well.

These last two provide the engine for the film’s rather slight action. Haas (his name is a stand-in for Jesus, recall) gets it into his head to bring peace to the slums by pretending to make a film with Conklin and Goldin, casting everyone in the neighborhood, and making them say nice things to each other. (An oddly Catholic impulse I felt, in its formal ritualism leading to grace, though Haas was Jewish).  Further, there is no film in the camera, giving the entire charade an existential slant not unlike we get in the plays of Jean Genet.

In the end, a real Hollywood film producer played by William Schallert gets wind of the project, and decides to make a real film, and that’s where we get into some heady territory. Not only has peace been achieved, but the poor people of the ‘hood will now be on the payroll merely for existing. Is this communism? Utopia? Heaven? Then it gets trippier, when much like the Monkees movie Head, the last few moments of the film become a replay of the film’s first few moments, including theme song and credits: the film is a film of a film of a film of a film in an endless feedback loop.

I don’t want to oversell the film’s technical brilliance. Its aspirations are great, but so are its limitations. The dialogue is frequently bad, almost Ed Wood level in its inexplicable refusal to move the plot forward. Haas’s lines are often simply strange and clunky; after all English was Haas’s third language (at least). Directorially, the pace is often slow, stilted, and full of dead air, with no sense of urgency or narrative momentum. Though the cast is well known, most of them were character actors accustomed only to small parts. Ironically Paradise Alley may have given them the largest, most dramatically challenging roles of their careers, and many of them seem stretched beyond their abilities. And then there’s the fact that Haas seems incapable of refraining from weird, inappropriately sexual jokes and moments, including a gratuitous near-rape scene in the film’s opening minutes. Also I’m not sure, I have to watch it again, but I think one of the female characters is inexplicably played by a man in drag. All of this goes to explain why the film wasn’t released for nearly three years after it was made, and why it continues to be so rare today.

But it is now one of my favorite films. Paradise Alley somehow manages to incorporate nearly everything I love in the world into an exceedingly strange and cosmic fruit salad. Watch it here.