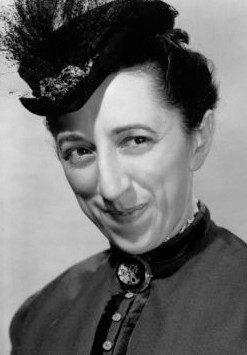 I might not have otherwise written about her here but for the fact that I have now written about every principal cast member of The Wizard of Oz — including  Singer’s Midgets — mostly because just about all of the others were in vaudeville, our original purview here. Completion mania being what it is, here we are!

Famous for being one of the great screen villains of all time, in real life Hamilton was noted for her sweetness. A schoolteacher by training, she broke into films in 1933, largely playing prim, schoolmarmish comic roles for the first leg of her career. 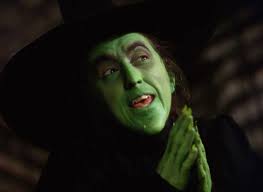 After The Wizard of Oz began to enjoy unprecedented popularity on television in the 1950s, her later roles would often cleverly reference her strong association with the iconic Wicked Witch of the West.

Of her dozens and dozens of film and tv roles here are some interesting ones she appears in: My Little Chickadee with W.C. Fields and Mae West (1940), The Villain Still Pursued Her with Buster Keaton and Hugh Herbert (1940), George White’s Scandals (1945), The Sin of Harold Diddlebock with Harold Lloyd (1947), William Castle’s 13 Ghosts (1960) and Robert Altman’s Brewster McCloud (1971). Oh, yes and let’s not forget the legendary Paul Lynde Halloween Special (1976).  In 1975 she went on Mister Rogers Neighborhood in a laudable effort to educate smaller children about the nature of make-believe, so they wouldn’t be inclined to freak out so much at her terrifying performance.

To find out more about about many of Margaret Hamilton’s “Wizard of Oz” co-stars and their connection to vaudeville, consult No Applause, Just Throw Money: The Book That Made Vaudeville Famous