Twists and Turns: The Amazing Life of Corinne Griffith 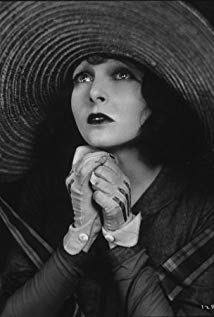 While one of the bigger dramatic stars of the silent film era, Corinne Griffith (1894-1979) is today better remember for things she did decades afterward.

No relation to film director D.W. Griffith, she was born in Texarkana, Texas, attended a convent school in New Orleans, then moved to Santa Monica with her mother after her father, a Methodist minister, passed away. She broke into show business as a dancer. Vitagraph signed her in 1916, immediately casting her in decent roles rather than supernumerary parts. She was the company’s top dramatic star by the end of the decade. In 1920, she married a fellow Vitagraph notable, actor-director Webster Campbell.

By 1923, she was out of Vitagraph’s price range (and apparently also Campbell’s; they were divorced that year as well). She starred in a couple of independent productions The Common Law and Six Days that year, then signed with First National, writing all sorts of advantageous provisos into her contract (script approval, strict 8 hour workday, and of course, lots and lots of money). In 1924 she married powerful producer Walter Morosco. In 1925 First National was acquired by Warner Brothers, making her one of that studio’s earliest stars. Some of her best remembered films came late in her career. The Lady in Ermine (1927) was remade two decades later by Ernst Lubitsch (his last film, he died before his work was completed). The 1928 adaptation of Avery Hopwood’s The Garden of Eden, was a big hit. The following year she was nominated for an Oscar for her role as Lady Emma Hamilton in The Divine Lady. It was Griffith’s first talkie. Her 1930 talkie remake of her 1924 silent hit Lilies of the Field did not do well however. Her next film Back Pay (1930) was her last Hollywood movie. Her last starring role was in the 1932 British film Lily Christine, opposite Colin Clive. In 1934, she and Morosco were divorced, and her heyday as a Hollywood star was done.

But her life was far from over. In the early ’30s she toured with a stage production of Noel Coward’s Design for Living, her only notable stage work.  In 1936 she married George Preston Marshall, founder and owner of the Washington Redskins football team. She became very involved in the management of the team and even wrote the lyrics to the Redkins fight song! In 1947, she reinvented herself as an author. Her first book, My Life with the Redskins (!) was well written enough that it would not be her last.  In 1952 she wrote a memoir about her early life, Papa’s Delicate Condition, which was made into a movie starring Jackie Gleason a decade later. In 1955 came the first of many recipe books, Eggs I Have Known. During this period she was also active in Republican politics, and was an early supporter of Richard M. Nixon. In religion she was a Christian Scientist. In 1958, she divorced Marshall, inaugurating yet another new chapter in her life.

It starts to get a little more cuckoo here! In 1962 she came out of retirement to appear in the fascinating and strange low-budget Hugo Haas film Paradise Alley, which I confess is where I first learned about her. She turned out many books during this period: Antiques I have Known (1961), Taxation Without Representation (1962), I Can’t Boil Water (1953), Hollywood Stories (1963), and Truth is Stranger (1964). In 1965 came a tumultuous event, and the acme of strangeness in her life. That year she married a minor Broadway performer named Danny Scholl, who was 20 years her junior. The problem was, she had told him that she was the same age as he, and that she was actually Corinne’s younger sister who had stepped in to take her place. A bizarre court case ensued. The couple were only married for about a month. Amazingly, it was Griffith and not Scholl who sought to annul the marriage. And she was still making this claim about her identity well into the mid 1970s. Tom Tryon wrote a fictionalized version of this event called Fedora, which Billy Wilder turned into a 1978 film.

Griffith went on to write three more books: Not for Men Only — But Almost (1969), This You Won’t Believe (1972), and I’m Lucky at Cards (1974).  She also dabbled in songwriting and produced a couple of record albums, Year of Love and Moods by Corinne. At the time of her death in 1979, thanks to investment of her Hollywood earnings into real estate, she was one of the richest women in the world in the world, leaving an estate valued at $150 million.

For more on silent film, please see my book Chain of Fools.