Today is the birthday of the great Raymond Griffith (1895-1957). In his day, Griffith was known as “The Silk Hat Comedian.” Unlike most of the other screen comedians who were more populist, Griffith was nattier than natty, invariably attired in tuxedo, opera cape, and top hat. Appointed thusly with his trim mustache and dark good looks, he possessed a certain superficial resemblance to Max Linder. But there the resemblance stopped.

In my view, Griffith’s humor is largely akin to that in James Bond movies during the Cubby Broccoli years. We laugh at how poised, dapper, and witty the character is in any given situation. Griffith is cool; he never perspires; his hair never gets mussed up. It is a very English idea. He is always on form, always graceful, always polite, seemingly imperturbable. This may make him sound boring, but there is something that prevents him from being so. What is it? There is a sort of laughter in his eye, a mad glint. Something is going on behind the mask of unflappability. On some level he is parodying stage melodramas and mysteries, which is quite fitting, because that is how Griffith started out.

A fourth generation thespian (no relation to D.W.), Griffith was born in Boston and reportedly made his stage debut at the age of fifteen months. He apparently lost his voice as a teenager due to respiratory diphtheria, although he always claimed that he screamed himself hoarse during a production of The Witching Hour. (The two theories aren’t mutually exclusive.) At any rate, Griffith’s voice was permanently reduced to a barely audible whisper, a major tragedy for one who seeks to pursue a life in the legitimate theatre. Fortunately, there were other options available to him in those days. He was able to find work as a clown, acrobat, and dancer in the circus and vaudeville, and he toured with a French pantomimic troupe. And then there came the silent movie industry, a kind of godsend for him.

Griffith began acting in L-KO Comedies in 1915, then moved over to Sennett after a few months. Sennett didn’t like Griffith’s subtler acting style and pulled him out from before the cameras to work as a gag-writer and assistant director. He was to stay with Sennett, with brief interludes at other studios, through 1921. Six years under the tutelage of the master taught him everything he needed to know about writing, directing, and performing in silent slapstick comedies. He would continue to work on both sides of the camera over the next few years.

In 1922 he started acting again as a supporting player, often in crime melodramas, playing newspaper reporters, detectives, con-men, and the like. These were to be his meat and drink for the next few years. The following year he wrote several scripts for popular light comedian Douglas MacLean. In 1924, he signed with Paramount, where he first began to attract notice as a screen comedian. Initially the parts were smaller, but the sparkle he brought to them got him elevated quickly to star status. What began to happen was he merged his Sennett experience with the melodramas in which he was acting. 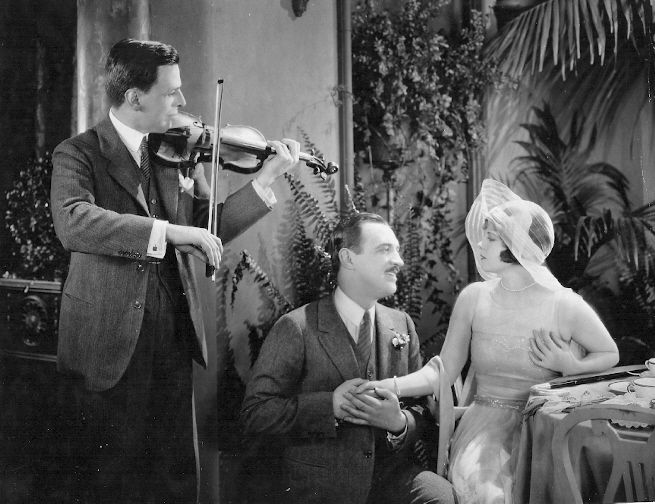 By The Night Club (1925), he’s starring, and his character is beginning to gel. Griffith plays a young man who swears off all women after having been jilted at the altar. Unfortunately, his uncle leaves him a one million dollar inheritance, contingent upon his marrying a certain girl, played by Vera Reynolds. Griffith’s character flees the country, only to run into the very girl he is trying to avoid. He naturally falls in love with her, even more so once she begins to spurn his advances. It culminates somehow with his sitting on the hood of a brakeless automobile, steering it with his feet through a series of heart-stopping hairpin turns down a treacherous mountain. His bride-to-be is in the back seat. Paths to Paradise, released later that year, further establishes the outlines of his persona. Griffith plays a suave con man and jewel thief who meets his match in a lady crook played by Betty Compson. The two team up and manage to make off with a diamond necklace…but must make their dash for the Mexican border followed by about a hundred motorcycle cops. 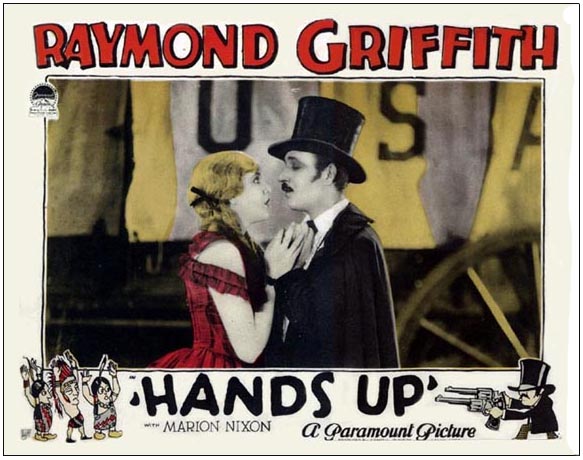 Hands Up! (1926) is considered Griffith’s finest and best known film (in the unlikely event a Griffith film gets screened anywhere nowadays, it tends to be this one.) It is a Civil War comedy told from the point of view of the South released an entire year before Keaton’s The General.  Griffith plays a Confederate spy on a mission to steal Yankee gold. Along the way, he constantly gets into fixes and coolly extricates himself from each one. Its most famous sequence has Griffith up against a wall in front of a firing squad. He gets himself out of the pickle by throwing dinner plates into the air at the crucial second, which his executioners are then obliged to shoot at, thinking they are clay pigeons.  The father of both of his love interests (he is equally in love with two sisters) is played by Mack Swain, in his first role after The Gold Rush.

Although he made several more starring films, You’d Be Surprised (1926) is the last completed one to survive. It is a comedy whodunit in which Griffith plays a suave, impeccably dressed coroner. The film’s title cards were written by Robert Benchley, and one of its more interesting features (oddly appropriate in a silent film) are a series of conversations in sign language between detective Griffith and a deaf butler.

Despite these successes, Griffith’s relationship with the studio seemed to go awry. Several Griffith films announced as in the works seem to have been aborted. A science-fiction comedy, The Ship That Sailed to Mars a.k.a Get Off the Earth, was announced in early 1926 and never heard from again. The Waiter from the Ritz, directed by James Cruze (best known for The Covered Wagon), was close to completely shot, but never released. 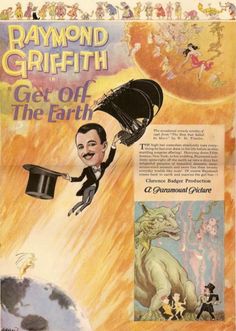 Just how these facts relate to Griffith’s departure from Paramount in 1927 is a little unclear. The official statement had them going their separate ways by “mutual consent.” There exists a resignation letter from Griffith to Adolph Zukor citing “studio pressures.” In retaliation, the studio did little or no publicity for Griffith’s last two films (both now lost), Wedding Bill$ and Time to Love. Additionally the films both got poor notices, plausible grounds for breaking the contract on the studio side. In a 1927 interview for Photoplay, Griffith spoke of serious aspirations, of longing to do drama. It was said that he was interested in adapting Joseph Conrad’s Lord Jim, for example. It may have been the studio’s insistence in putting him in comedies that caused his dissatisfaction. Unlike the other major silent comedians, Griffith wasn’t his own producer, he was a contract player (as Keaton would later be at MGM). He was supposed to do what he was told.

Whatever caused the rift with Paramount, Griffith found that he had difficulty lining up a deal at another studio. Then he took a long honeymoon with his new bride. By the time he got back, it was time to worry about sound. Recall that Griffith could scarcely talk due to a throat condition. This was not a good development for him.

His last movie role was a showy turn as a dying soldier in All Quiet on the Western Front, a role which only required him to gasp and whisper (1930). But there aren’t many dying soldier parts. Griffith remained in the industry as a producer and script doctor for the next decade, and then retired.

(Special thanks to Bruce Lawton for his assistance on the section on You’d Be Surprised).

And now, here are some of the good parts of Hands Up!

For more on silent and slapstick comedy, and great comedians like Raymond Griffith, don’t  miss my new book Chain of Fools: Silent Comedy and Its Legacies from Nickelodeons to Youtube